The capital of St Helena, home of government, banking, retail, and a bustling metropolis, relatively speaking. Like all major capitals Jamestown is a congested, convoluted, disorganised and densely populated sort of place. Snaking up a narrow strip at the base of a steep sided valley, the buildings push and shove each other for space, leaning on one another and spill out onto the divergent estuary of roads which split from the main road at the top of the town into several smaller tributaries as the tarmac flows towards the sea.

Jamestown snakes its way to the sea

Streets and junctions are marked with these wonderful wooden signs.

Jamestown is hot, dusty and dry most of the year, it has a distinctly topical climate and is the one part of the Island that truly betrays the Tropical latitude, sat as we are at 15.95 degrees South. The volcanic valley walls rise high and steep, rock falls were a constant danger and hence wire mesh and strategic fences scar across the valley sides. St Helena is a particularly unstable place in general, hard igneous rock sandwiched by soft pyroclastic muds and sands do not make for firm foundations and the Island as a whole has been pretty much on a steady slide into the sea ever since its creation some fourteen million years ago.

At the top of the Valley sits St Helena’s Hospital, a lovely looking building, surrounded by tropical flowers and a pleasant atmosphere. Moving down the road the sapphire blue Sea at the foot of the Valley dominates the eye line, as Mediterranean looking buildings line the road, the odd shop and a fridge repair centre start to reveal the commercial nature of the town. 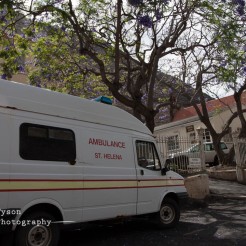 Looking down Market Street towards the Bridge

Barrack square arrives on the right, the first sense of the history of the town, being once a home for Island Soldiers, and now for Island residents. Further down the road Pilling Primary school, also a former Barracks, is the daytime home for Oliver and Charlie. A delightful building, which seems very much a military design on the outside, but very much a school as you pass through the old wooden doors. 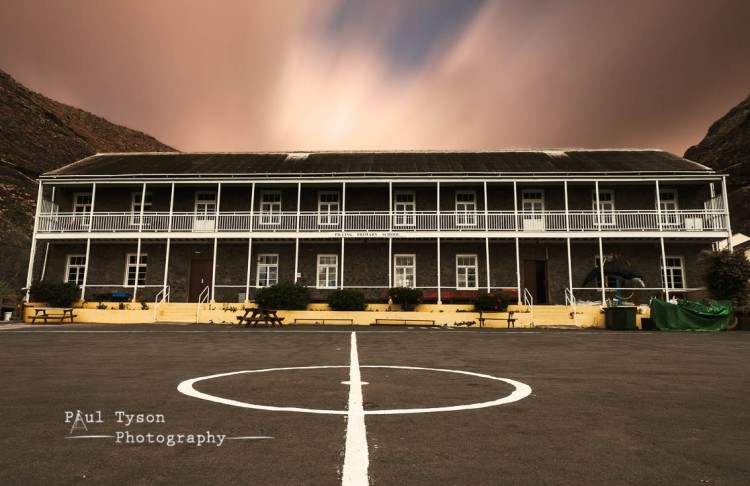 Pilling school and upper Jamestown as the mist rolls descends from the central peaks.

Founded in 1659 by The East India Trading Company, Jamestown, named after King James II is full of history, the buildings vary in style, age and condition, but all in Jamestown are old, and most well over one hundred years in age. Most are built out of volcanic rock and many are of World importance as examples of Georgian Colonial Architecture.

Moving down the aptly named Market Street and the hustle and bustle of the Islands only real shopping district (that consists of more than two shops together) becomes evident. Thorpes Grocery store, one of the oldest and most established retailers on the Island, sit alongside The Queen Mary and Queen Victoria Stores, one a former pub, the other once a cinema. Tinkers provides sliced cold meets and across the way the Hive, selling a variety of goods from Diving regulators to chocolate willies with some stationary in between.

We now approach the bridge, not obvious but in fact, an actual bridge as the Jamestown “Run” flows beneath the road here. The Run is a small stream running the length of Jamestown that was constructed to bring freshwater to the residents, and after serious flooding was widened in an attempt to provide an efficient run off for heavy rains. The bridge does not appear to be a bridge, and is instead a wide square section of road, bordered by the market selling fresh fish and veg daily, and meats on Thursday mornings, and by the towns main Pubs, the Standard and the White Horse. Jamestown apparently (so I’m told) once had more pubs and houses of Ill repute per capita than anywhere else on earth, but (sadly) only these two remain. Very traditional, one can imagine sitting here a hundred and fifty years ago mulling over the failings of the Governor, taxation, British rule or the price of beer just as today. 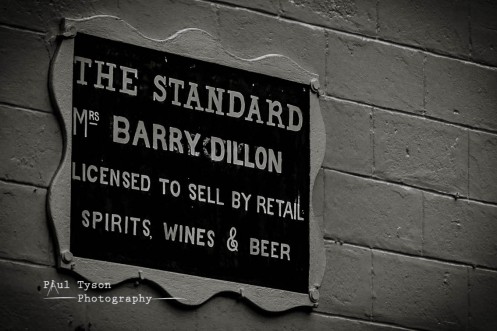 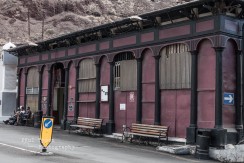 Around the corner Market street meets Napoleon Street, which has wound its way down the west side of the valley and 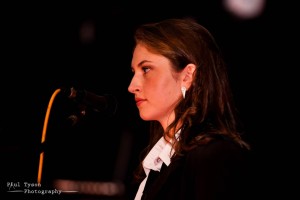 ultimately leads to Longwood and the Briars, no doubt Napoleon was led to his temporary home in the Briars up this road when he first arrived, just as many visitors do now. Where Napoleon and Market Streets merge, they become Main Street, a wide concourse and the very essence of Jamestown. The grand Consulate Hotel, like something dropped right out of Colonial times inside and out takes pride of place. On the left, the post office is a major hub of town. St Helena does not have a postal service, and as such mail must be collected from the post office, along with administration of almost all licenses and records on the Island, car taxation, and pensions and benefits the post office plays an essential role in everyday life on St Helena. 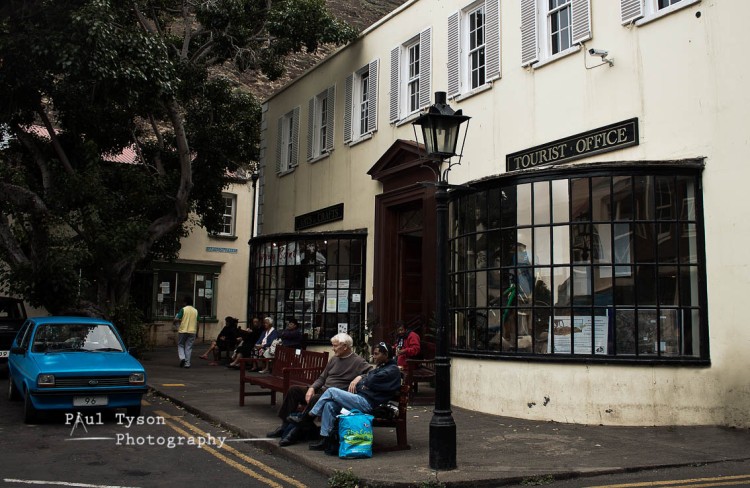 The Canister, now the Tourist office and craft centre. 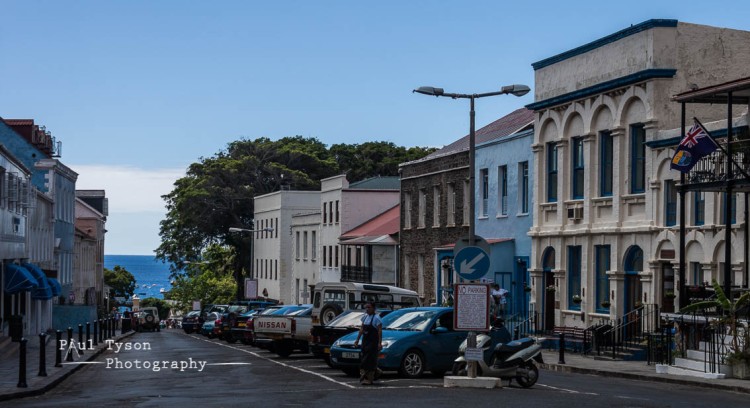 The Consulate Hotel on the right looking down Main street 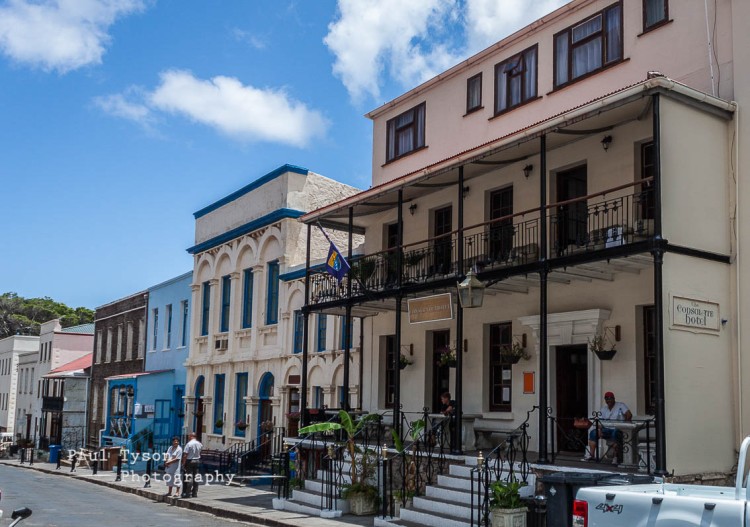 The Star is one of the main, and most modern grocery stores on the Island, and reminds me of the old Co-op local store in my home town. Mum you will remember it well, I used to sit outside with Shep whilst you proceeded to fill what seemed like in the region of 300 bags of shopping!  It is owned by Solomons, a company which traces itself back to Saul Solomon who was put ashore in 1790, gravely ill, from a merchant ship on its way to India; he recovered, decided there was money to be made in St Helena, and persuaded his brothers Benjamin and Joseph to come from England to join him.  He is also reputed to have tried to help Napoleon escape, which I guess would have been an opportunity to make serious money in St Helena.  The shops are a small part of Solomons’ operations on the island which include banking, insurance, agent for the shipping line and, a lot of outsourced work from government.

Irene, proprietor at Harris Guest House talks to friends. Jamestown is a great place to meet and chat and walking down the road is always full of chatter and hellos and greetings. .

Moving down the Main street it becomes wider still, 2 on Main currently houses one of the best restaurants on the Island, this training restaurant will soon make way for a brand new hotel, comprising this building and its appropriately named neighbours, 1 and 3 on Main. Next door sits Harris’s Guest House and nearby, the Wellington Guest House. As the street widens it becomes the parade, and the seat of St Helena Government, the Castle, sits alongside the road adjacent to the town walls.

The Castle was originally, in 1860, a Wooden Fort, but was reconstructed in 1710 as the original construction had become rotten with termites. Part of this 1710 construction is still present, but numerous additions and alterations have been made since. Alongside the Castle sits the castle gardens, a small but perfectly formed park. The grounds man does a superb job ensuring a variety of colour and flowers year round, making the Gardens a lovely spot for lunch and to pass the time of day. 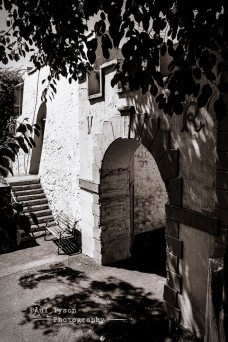 One of two entrances to the Castle 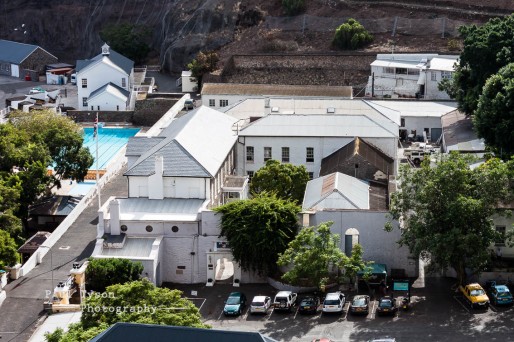 The Castle as seen from Jacobs Ladder

One of two entrances to the Castle 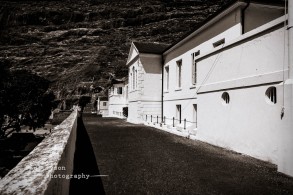 A top of the castle walls in Jamestown. 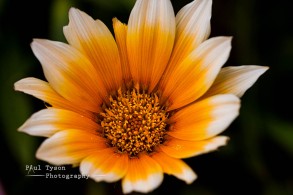 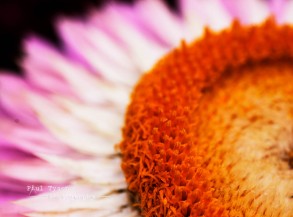 Jamestown ends or begins at the Castle Gates, an arch in the substantial Town Walls that once stood as a fortress to protect the town from invasion. St Helena is (or was) one of the most fortified places on Earth, and the remnants of the fortifications and Barracks can be seen everywhere. From the water front in Jamestown, one can see High Knoll Fort, Ladder Hill Fort, Mudens Battery, and a further two gun battery’s, as well as the numerous gun ports that line the Main Town walls themselves. The waterfront retains the historic feel that all of Jamestown does, a walk along the wharf revealing old warehouses and storage buildings. The wharf is now the main entrance and exit to the Island. When the RMS is in the bay, the Wharf busts into life as a frenzy of containers are loaded and unloaded, retailers and individuals excitedly collecting new goods, presents, and all manner of things. 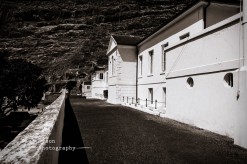 A top of the castle walls in Jamestown.

Gun Battery looking down on the Briars, a small elevated suberb of Jamestown and the first home of Napoleon on St Helena

Like much on St Helena the wharf runs on the Darwin Principle, that if you are stupid enough to stand under a 20 tonne container, it’s your own fault. Refreshingly and somewhat  surprisingly for a UK resident one can walk amongst the cranes and containers, the fork lift trucks and good lorries. Funnily enough, no one dies, and it’s very refreshing to be treated as an adult in such matters. Not that everything on the Wharf makes sense. Understandably swimming from the wharf is restricted when the RMS is in the bay, but it is also restricted if some goods have been left in the loading area. But swimming is permissible when other boats and vessels are back and forth from the wharf, so long as no goods are resting on the concrete, I will never understand it, but do as Im told!

Constructed to haul Manure from Jamestown to Half Tree Hollow, Jacobs ladder is now one of the Islands most popular tourist attractions

On a weekend evening the wharf and waterfront come to life. The Wharf becomes a magnet for young men and their cars, like something out of Fast and Furious (old people may need to look that one up!) all manner of supped up cars with large noisy exhausts and lights in strange places pump music out whilst their owners gather to discuss the latest in sub woofers (or something like that). Meanwhile, families have a rare treat and fill up the two waterfront bars, Donny’s and the Mule Yard, enjoying a drink from the bar and food from the local take aways whilst watching the sunset, knowing children are safe to play nearby. As early evening turns to late evening the families go home and the towns beautiful people (well, most of them)  take over, music drink and dancing in the warm tropical air tale over until the early hours. 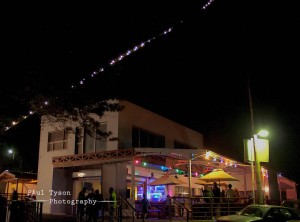 Jamestown is hot and dry, its overcrowded and parking is a night mare, but it is also fascinating, bustling, full of history and atmosphere and its people are wonderful I love it.