So, half term has been and gone, and you know what, it really wasn’t as bad as I thought it may have been. Bev booked a day of leave in the middle of the week, and worked a little flexibly around that, and between boobies, rock pooling, searching for insects and walks I, the boys and the family got on just fine, who’d of thought it.

St Helena is renowned for its walks. Back home many wonderful hours were spent on the hills and mountains of Snowdonia. Extreme scrambling and ridge walks are a particular favourite and I intend to tackle every walk, long and short, difficult and easy whilst here during the next two years. The first real walk I tackled since our arrival was the walk to South West Point, a relatively easy introduction to Island walking and one quite achievable with the children in tow.

Invited by some friends to occupy a half term day, I spent a thoroughly enjoyable afternoon taking in the spectacular views North and South across the Island as we worked our way along a narrowing peninsular. With lots of other children with us, Oliver, whom loves the outdoors was in his element, and Charlie, at just three years old tackled his first full walk, all three hours of it, spectacularly well, leaving me very proud of his efforts.

Charlie, normally terrible with walking any distance was utterly brilliant.

The kids reach the end of the walk.

Our usual Friday night at Donny’s bar was finished off with a walk along the water front to join some locals fishing in the clear blue waters. Flying fish a plenty were being caught whilst younger members of the fishing family attempted to catch needlefish. Oliver and Charlie were of course fascinated, and fishing rods are now on the Christmas list. Myself, I can think of few better ways to spend an evening than in the warm sheltered cove at the wharf, deep blue waters shimmering under the moonlight and fishing boats at anchor in the bay bobbing gently with the ways. A few cool beers, some fish for tea, and reportedly the odd dolphin making an appearance, come to think of it those fishing rods may not last until Christmas! 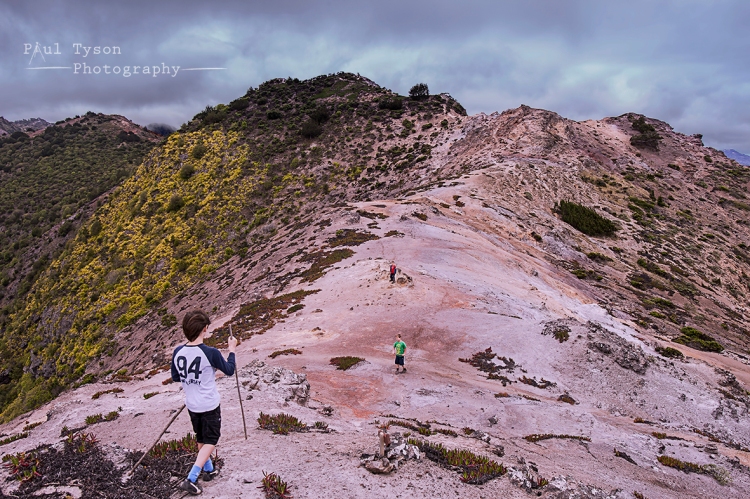 Purple and blue sands dominate as we pass through Blue Hill

Although I have said this before, summer is now definitely just around the corner and the season has begun to change. Wildlife around us has been our first sign of the warming weather. The thistle like nargie weed has died off, losing its bright orange flowers and green stems and turning brown. Other plants turn to flower, and leaves appear on trees in our garden that we previously had thought were dead. Most notably I have tan lines, the first of which for many, many a year.

Along with the changing season is an increase in the number of ants, given that it seems our home is on top of an ant nest. Now for most people ants are a nuisance and better off gotten rid of. For Bev and I they present an unusual dilemma. Clean, and not carrying any disease, I greatly admire the work of the humble ant. Functioning in unison, each with specific roles,  together in simple robotic co-ordination to achieve extraordinary feats of engineering; I believe the human race could learn much from these little autonomous beings. Instead of wishing them ill I find myself hypnotised by the continual lines or marching ants, carrying off spilt crumbs and other food items across the Himalaya’s of our kitchen cupboards and concrete steps.

Another change of the season is evident in the clearing night skies and the arrival of a bright new moon. The thin atmosphere and non-existent light pollution means the moon is bright, very very bright, the likes of which I have never seen before. Stepping outside in the middle of the night one would imagine it is early morning, and driving is possible in the dead of night without the use of headlights, such is the illumination provided by the moon beams. (I only tried this for a short distance!). Looking out at the moon and the false daylight makes me grateful for the shared experience with my family. It is not possible to describe the night sky here, you may read this blog, I could post pictures, and when we return home I will doubtless tell friends and family of the crisp dark shadows cast by the midnight sun. But it is only Bev and the boys who will truly understand when we return home, just what it is to step out at night to see the earth bathed in this white glow. I feel blessed that in years to come I will have people that will remember and recount with the same enthusiasm I will have, the wonderful experiences that we are collecting here on this incredible Island.

Looking back from Southwest point with St Helena out in front of us.

Lots wife and Sandy Bay Panorama from the Start of the Southwest Point walk.

As half term passed by the boys went back to school with surprisingly little fuss. After his first couple of days Oliver came home excitedly asking me if we could buy a puppy.  With much babbling I came up with some excuses as to why we could not get a puppy and enquired where and who was selling them. “The school” was his reply. As is customary for Oliver if one parent says “no” to a given request, the other is always worth a try and so it followed that Bev was also asked if we could have a puppy, this time however Oliver added the detail that the puppy costs just 10p, and they need the money in school tomorrow. It transpires of course that puppy’s cost more than 10p, and they are not available through the local school; poppies on the other hand are, much to Oliver’s disappointment when we worked out his mistake, one borne either of not listening properly or confusion with the saint accent. Either way a poppy was of course fine and after a little talking down, Oliver took his 10p to school the following day.

As the children return to school and Bev returns to normal working hours, my groin injury is still keeping me from my physical exertions. Football, badminton and Jacob’s ladder have all been off the agenda for some weeks now. However, far from going back to feeling empty with nothing to do to help me pass the time I am finding that my days are filling up rapidly. I spend as many hours as I can working on my photography, (don’t forget my images can be purchased from the gallery) and preparing my thoughts for the blog. The tourist office are working with me and using my images when and where appropriate, I have regular tagging expeditions with the marine team and other exciting opportunities and photography projects are on the horizon.

So, half term has passed, and you know what it was indeed not hell. There were of course times, like all parents, that I couldn’t wait for the boys to go back to school. But there were also moments when I was grateful for their company, and felt that maybe, with the right balance and positive thinking I could survive the forthcoming Christmas holidays which are now be just a stone’s throw away. A holiday no doubt made easier by the soon to be usable swimming pool, now looking bright blue and ready to be filled as the paint and correct brushes evidently arrived on island last week.

Sunshine, swimming and the sightings of the first Whale Sharks in the bay herald the arrival of the next chapter in our story, bring it on!

8 thoughts on “Half Term Hell”