I have been led to believe that St Helena is only small, apparently ten miles long and five miles wide, fifty square miles in area. That would make it very small in comparison to London for example which is around 950 square miles. (more comparisons between London and St Helena here)

However, quite simply I do not believe it, it cannot be true, St Helena is gigantic, it must be enormous, it is the only explanation I can find for the huge array of people and places, of habitats and climates and even of seasons on this Island.

Having driven almost every mile of St Helena’s roads I can say that this Island is continental in its variety of environments. Were you to flatten is peaks and valleys into one large sheet, I have no doubt it could envelope the earth.

Coastal areas are dry and arid, dominated by bare scree slopes, steep cliffs and sparse vegetation of low lying salt and arid tolerant Ice plants (Aizoaceae),  hottentot figs (Carpobrotus edulis) , and the endemic,  lime green Babies Toes (Hydrodea cryptantha) which are still found in isolated pockets. The Sandy Bay amphitheatre, containing the only significant beach on the Island with its black volcanic sands, steep crags and sharp ridges is reminiscent of the Grand Canyon, snaking its way deep into the Island, the eroded remains of the second of St Helena’s two shield volcanoes that erupted some 12 million years ago. Huge cliff faces and giant rock formations reach from the waves below; flashes of white pass by as the beautiful Fairy Tern or Red Billed Tropic birds fly in to their nest sights, contrasted against the rocks of blue, purple and orange.

Moving up to the low lying terraces of Half Tree Hollow, Prosperous Plain, Donkey Plain or Horse Pasture and the environment takes on a semi-arid scrub land feel. Like an old Western where Cacti grow thick. Nargy weed with its bright orange golf balls lining its central stem thrives here, and low lying scrub with creepers now forming large expansive mats, succulent leaves with bright red flashes and large yellow flowers. Carpets of yellow tussocks of fountain grass stem the tide of erosion, whilst the elegant and grand English Aloe stands high, reaching for the sky with singular bamboo like stems some three or four meters high. Canaries, finches and Mynah birds provide a chorus of chirps whistles and song as they fly in small flocks from feeding ground to feeding ground, picking off scurrying insects, moths or falling seeds.

The enormous yellow flowers of the cup of gold (Solandra maxima) catch the eye as you past A&D mini market. Roads are lined with wild tomatoes, currants, lilacs, hibiscus, fuscia, acasia, passion flowers which sit along side more species of plants than I could mention, providing all colours of the rainbow where ever one looks. The endemic dwarf Ebony, with its delicate white, petticoat like flowers,  cultivated from the last specimen on earth found clinging to the edge of existence high on a cliff face, now grows in abundance. Trees of craffa thorn (Erythrina caffra), jacaranda (Jacarana mimosifolia) and coral trees (Erythrina speciosa) provide red and purple flowers of colour against the historic buildings, whilst the occasional palm tree reveals the sub-tropical climate of the Island 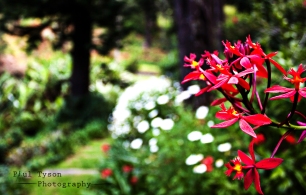 As you move inland the environment changes again, becoming green and lush with valleys of grass and tall woodlands appearing. The stunning Arum Lilly (Zantedeschia aethiopica) starts to make an appearance, pure white flowers and elegant glossy green stems, growing wild in huge abundance.  Pasture and wide open green plains are grazed by cattle and sheep providing a sense of home, a familiar rolling landscape of fields and hedgerow, its peculiarity revealed by the nesting wirebirds, a beautiful and dainty plover found, like hundreds of other species, only on St Helena. Forests planted over a hundred years ago contain such diverse mix of trees that one could equally be in a Scottish Highland forest of pines facing one way, and yet turn around to find themselves in an

old English forest with Oak and other gnarled trees twisting round, thick roots breaking the forest floor, On the South Side of the Island, at Levelwood, huge stands of Eucalyptus trees pass for a rainforest canopy. Their stripped bark hanging like vines, with a variety of species forming multiple layers as the forest itself is dissected by the steep slopes and truncated spurs. In the valleys, streams provide a permanent wetland, home to Banana trees, wild celery and yams. The orchestra of frogs play continuously, like a thousand raindrops echoing into an underground lake. These mid-level valleys are a land where daisies grow as trees, home to the last remaining stand of wild, endemic gumwood trees, in Deep Dale.

Sandy Bay Amphitheatre. Slopes of Flax and Arum Lilies give way to forests with endmeic Gumwoods and eventually the barren steep gorges of the Gates of Chaos and Broad gut.

Driving up higher, the winding roads take you into green carpets of flax covering entire slopes with a velvet coat. Flax, once a major export industry on St Helena was planted in huge quantities and now dominates much of the upper slopes. Although the flax has sadly replaced much of the native cloud forests it does in its own right hold a degree of beauty, and adds to the sense of history that the Island exudes in abundance.

The central ridge of St Helena holds one of the most precious habitats on earth, a world where dinosaurs would not look out of place, now sadly an urgent conservation concern. Just forty hectares of native wild cloud forest, dominated by the prehistoric Tree fern (Dicksomia arborecens) remain. Where cabbages are trees and some of the rarest invertebrates on earth find shelter in the damp undergrowth.

Perched high on the central peaks this is a wind-swept world, where clouds hang forming dew of the tips of leaves only to be swept away forming swirls of smoke down the valleys before burning off in the warmth of the lower reaches. Trees bend sideways, almost reaching the ground at the their tips, their longest arms often lower than their roots as they bend down over the sharp ridges, pushed over by the relentless Atlantic Ocean winds.

These changes in environment, almost continental in their diversity happen over such short distances that one may even experience changes in season whilst driving half a mile up the road. Plants now dry and bereft of life at the lowermost end of Half Tree Hollow can be found in full bloom at the top. Jamestown may be five or more degrees warmer than a mile inland at Francis Plain, where a thick layer of cloud often provides rain all day whilst James Bay bathes in sunshine.

From the Grand Canyon to rural England, from Asian cloud forest to Texan desert, ST Helena has it all and is indeed an enormous Island. The St Helena Tourist board promotes the Island as the most extraordinary place on earth, approaching our third month here I should think they are right, and I am certainly not going to argue with that assessment.

10 thoughts on “The Gigantic Isle”