This weekend we embarked on our third trip out to see the Dolphins and Whales. Despite our fantastic time two weeks ago, subsequent trips from the Island have seen some truly breathtaking spectacles, and we wanted part of that action. It may seem that we go whale watching a lot, and we do, but not as often as some on the Island who seem to be present on every trip that departs the wharf.

Our weekend started back in the mud, on the monthly Saint Helena National Trust‘s community conservation engagement program we helped with four weeks ago. This time round we were at St Paul’s Primary school a lovely school set up in the hills and known as the Country School. Three hours of back breaking work saw us once again clearing invasive species, this time in the form of a fern with a root network reminiscent of the cables at the rear of my surround sound system, and so thick it required pick axes to dig out. Being interviewed for the local newspaper, I overheard the conservationist in charge, Jason, explaining that the work to remove the ferns was important to clear the way to re-plant another endemic plant species. It was at this point that I realised we had spent three hours, digging and clearing a 3m square area of fern only to see it replaced with, yes, another fern!

Jason explained that there are the right kind of ferns, and the wrong kind of ferns, to which the reply from our co-worker, Paul came, “like Fern Cotton and Fern Briton”!

The monthly community engagement program plays a greater role in raising awareness and instilling public participation and responsibility for the Islands rare plant life, than it does real conservation, which is carried out Monday to Sunday every other day of the month. Some of the rarest plants on earth are clinging to existence on St Helena, and it is vital that the locals appreciate and understand the importance of protecting these habitats if the program is to succeed long term.

The evening was spent back in the company of the Days family who came round for a movie and pizza. Get Carters, a local eatery provides the Island with take away pizza of fine quality. Amongst the usual selection I felt obligated to try a 9” Caribbean, the topping consisting of Jerk Chicken, Bacon and, Banana, no that is not a typo, Banana on a Pizza, and delicious it was too.

On Sunday morning Bev and I embarked on the first of our theory sessions to learn to dive. Given my background in Marine Biology and Public Aquaria it is highly unusual that I don’t already dive, but finally a life-long ambition is being realised on this tiny Island, and I will soon be diving amongst some of the most pristine marine environments in the World and sharing my time with Whale Sharks, Devil rays and a smorgasbord of endemic species seen nowhere else in the World.

And so we arrive at our Sunday afternoon boat trip and what a trip it was. This time we took to the Sea with Into the Blue, on a much smaller rib boat, an inflatable with two out board motors capable of travelling at great speed. The advantage of this, is the ability to move across the sea to where the animals are spotted in the distance, and get there before they disappear. Being low to the water also presents great views if the animals come close and of course it is huge fun bouncing and skipping across the waves.

Craig the operator and captain has been very successful in recent weeks and it seems has a sixth sense for finding the best views of these amazing animals with 13 sightings in 14 trips. So with great expectation we once again swung off the wharf and onto our latest adventure.

Moving at speed we were once again heading along the Northern coast towards egg Island, before we knew it we experienced the now familiar stop, turn and full throttle. Being experienced as we now are we knew or captain had spotted something.

Within minutes we were surrounded by a pod of around 300 Pan Tropical dolphins. Everywhere we turned dolphins were jumping, spinning, flipping and diving around us. The Deep Blue Circus Ring providing the perfect stage for these acrobats par excellence.  The excitement on the boat was palpable with expressions of “wow”, “amazing” “awesome” and a few expletives to boot. The sense that looking in one direction would cause one to miss out on the next leap clear of the water just behind you, caused us to flit from one side of the boat to another, jostling for position. Dolphins were jumping a clear 15ft from the waves, spinning and dancing in the air before coming down with a splash of a tail.

Pan Tropical Dolphins, the acrobats and show off’s of this watery World, a pod of some three hundred all around us. 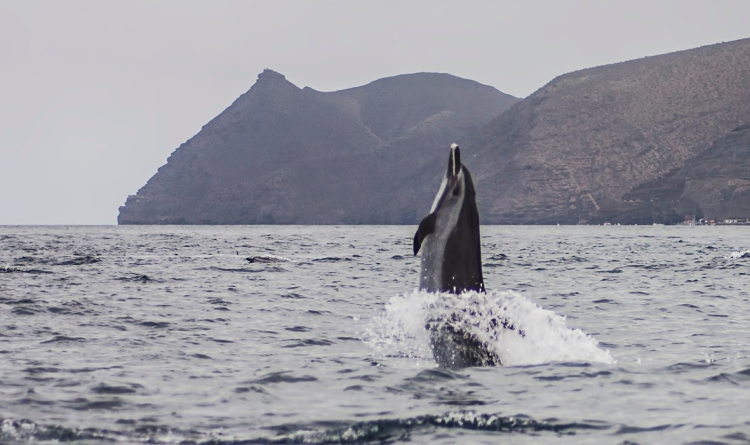 This individual liked to show off by swimming vertically, pushing himself along in this upright position!

The boat suddenly slowed to a halt as Craig made adjustments, with some sadness the Dolphins is seemed to then tire of us and the acrobatics ceased. A quick turn around and we were off again, soon back up to speed and along with us the dolphins began act 2 of their show. They suddenly sprung back into action with the sound of the motor and within a minute were once again putting on the display of a lifetime. Without doubt these animals were showing off, performing for their doting public and loving every minute of it. Oliver sat in amazement, completely breath taken at the sight, the experience he will keep with him for a long time. Charlie on the other hand was less interested, or at least too tied to be, seemingly nodding off to sleep with the warmth and comfort provided by his large padded life jacket. 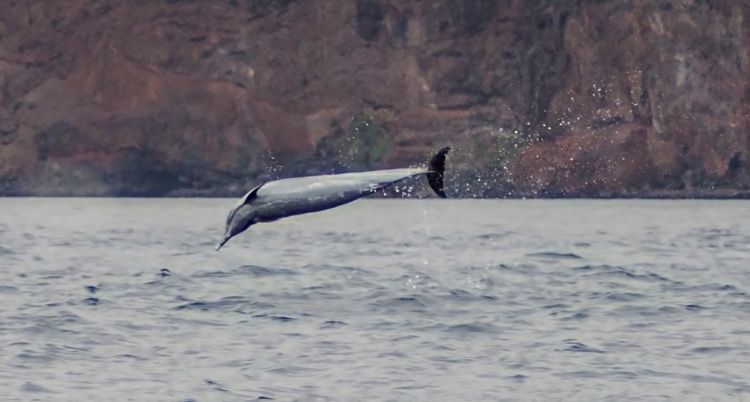 Incredibly difficult to photograph. You never know where they are going to jump up, and inevitably you miss the focus, the timing, or both!

After a time we moved on, I say a time as I have no idea how long we spent dancing with the dolphins, it may have been minutes it may have been an hour such was the depth of enthralment and captivation the dolphins held us in. Charlie at this point was soon brought back to life as some home baked chocolate brownie was passed round the passengers.

What then seemed like an age passed with no further sighting of dolphin or whale. Our captain approached some local fishermen, who, after pointing us in the right direction, held up their catch, a huge Moray Eel, highly prised eating in these parts.

Cousins swim side by side

Two adult Hump Back Whales with two Rough Toothed Dolphins which help to show the scale of these giant animals.

Following their directions we headed off and sure enough, in the distance we spotted the now familiar site of a hump, breaking the waves in the distance. As we approached it became apparent that two Adult Humpbacks were being accompanied by a smaller pod of dolphins moving slowly around them.

It became clear that these two whales were not just moving along slowly, diving periodically with a wave of their huge tail as we had seen before, but were also rolling and splashing, turning and spinning, their huge pectoral fins (the largest pectoral fins of all the Whales), crashing down as they rolled onto their backs, revealing their bright white throats, and ventral pleats. With each dive we waited with baited breath for a breach, the huge whale leaping from the water and crashing down with a tidal wave. But alas this never materialised as they resurfaced to continue their gentle play.

With the largest pectoral fin of any animal in the World. A photograph cannon convey the size of this animal. The fin you are looking at is around 4.5m long!

Splashing huge waves with a swipe of the caudal fin.

Rough Toothed Dolphins swam alongside and between them as we began to question this behaviour we observed. It seemed that maybe we were witnessing courting behaviour but further research with the Island’s Marine Team suggests the dolphin’s presence may have indicated that we were witnessing a calving mother and we may have been privy to some stage of a birth. Whatever the truth it was wonderful to watch and the Rough Toothed dolphins provided a greater sense of scale for these giants of the sea.

Look at the fin at the far right of the image. That is the fin of a Rough Toothed Dolphin which can themselves reach 2.8m and is completely dwarfed by it’s gigantic cousin.

Relative to their cousin the Pan Tropical Dolphin, Rough Tooths were very calm, cruising around alongside the Whales.

Returning back to shore we reflected on our weekend adventure. Many people spend their lives and never come close to seeing what we witnessed today, others embark on a once in a lifetime holiday to see such things. Yet here we are, with the privilege of a trip every fortnight, or more regularly if we choose, to spend our time amongst these mesmeric animals. How lucky we must be to live on St Helena.

I will leave you now to enjoy the photographs from our trip however one thing has now become clear to me, whilst my photography skills are improving and my enjoyment for the art is enormous, my budget, second hand equipment does not cut the mustard amongst the big boys. Following the success of my blog I hope to develop my writing and photography further and who knows maybe one say sell some photos in the future. Despite my wife’s protests and rightly pointing out we cannot afford it, I am now saving for a new photography shopping list, including a whacking big telephoto zoom lens, a boy can dream cant he!

This is the dorsal fin of the Humpback Whale. Situated towards the back third of the body length just before the tail. 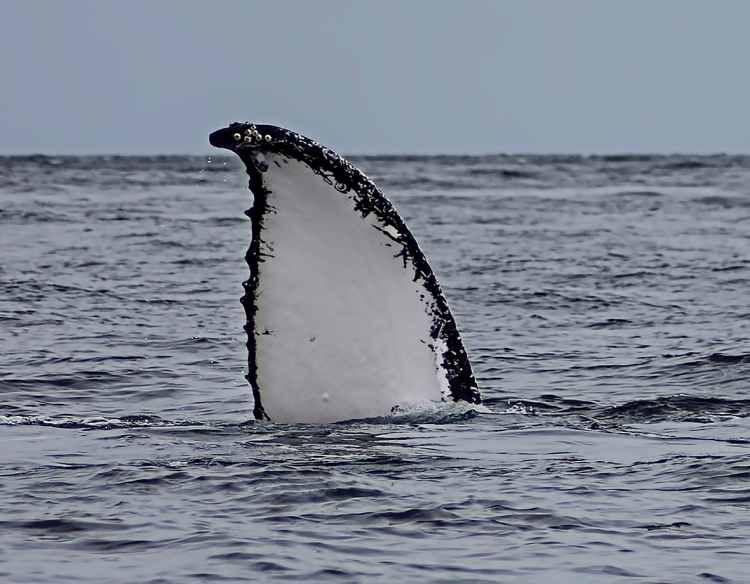