I will never forget the hard work, sweating through the Gates of Chaos, making our way to Lot’s Wife, to be rewarded by the amazing site of boobies everywhere, sitting motionless waiting for me hold them, measure them and record their vital statistics. With my wife alongside me, just as eager to join in, it is a day I will never forget.

In this story, the Gates of Chaos is a steep sided, dry valley running inland from the coast, an offshoot of St Helena’s own Grand Canyon. Twisted, folded rocks, cracks in fissures define the edges of these deeply eroded cliffs, the red brown earth punctuated by patches of bright lime green of the endemic plant Baby Toes.

Looking back down the Gates of Chaos. The Large rock in the distance is called Lot. husband to Lots Wife!

Lots Wife is a huge pinnacle of rock, a plug of larva which rose up through conduits in the existing rock forming pillars of the weather resistant rock trachyte and phonolite. Phonolite so called because of its resonance when struck, sounding like metal tubes as rocks fall upon one another.

Walking Up to Lots Wife, Graham leading the way.

Boobies (Sula dactylatra) are of course magnificent Seabirds, (what else would they be?). A diving marine bird, feeding on fish, a key indicator species for the health of local fish stocks and as such the subject of ongoing tagging and monitoring to assess population trends. They are also the reason that Bev and I found ourselves sat on a high ridge, with extraordinary views of Sandy Bay, Lots Wife ponds, the Atlantic Ocean and ever present Diana’s Peak, feeling like David Attenborough on the BBC’s latest big budget natural history documentary. 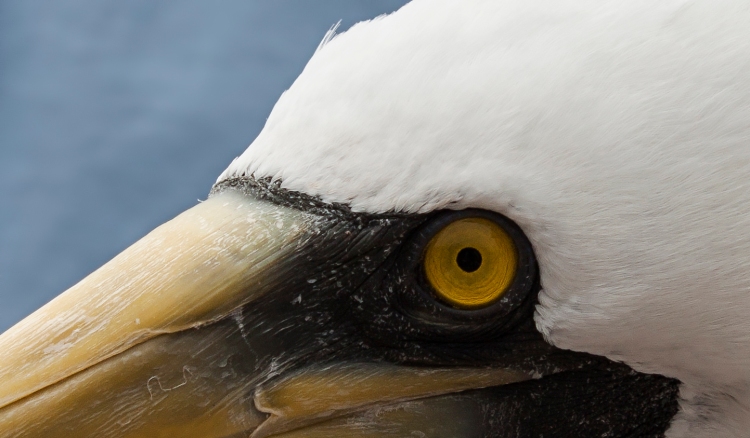 I love the piecing eyes of the Masked Booby. Perfectly designed fro predators. 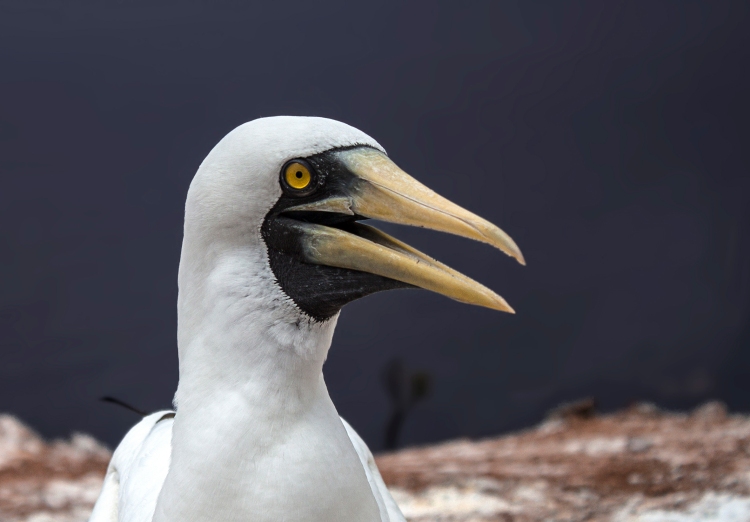 Birds cant sweat, so to cool down they pant rapidly. 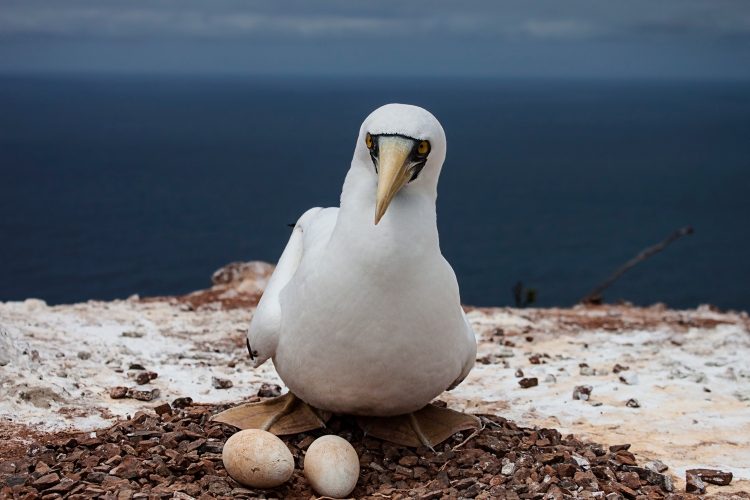 Our morning started with a drive down the infamous road to Sandy Bay, having earlier and gratefully dropped Oliver and Charlie children off with a friend (Thank you Lindsay). The roads on St Helena are extreme with steep inclines and descents being the norm. Sandy Bay Road however is something else, and as the only road on the Island that has a Warning Sign such is the angle of its incline its notoriety is well deserved.

Arriving at Sandy Bay we teamed up with Annalea of the Marine Conservation Team and Graham Sim, resident Jacques Cousteau  of St Helena. The Marine Team, under the Environment Natural  Resources Directorate (ENRD), have been monitoring this population of Boobies for a number of years, tracking their breeding efforts and populations as well as assessing their condition. The birds feed on fish in local waters and as such their population is a direct indicator of the health of local fisheries stocks. The work is important therefore in terms of both conservation of the birds themselves and in planning and regulation of fishery activities in St Helenian waters.

Graham led the way up Broad Gut and then into the Gates of Chaos and ultimately up a broad, scree covered ridge to the tagging site at Lots Wife. Graham Sim is, in short incredible. At 77 years of age he led the way up the extreme terrain, rising from sea level to 600 meters. Graham has been involved in marine conservation in one form or another for over fifty years, and was half of a pair of the very first people in the World to dive and explore St Helena’s waters.

Broad Gut, the Gates of Chaos and the South West Corner of St Helena are an incredible landscape, blending somewhere between the Grand Canyon and the foothills of Everest they are formed of volcanic eruptions and subsequent years of weathering and erosion from extreme flash floods. Now dry, we followed the scars of a river bed before veering to the left to ascend the scree slope that led to the Booby nesting grounds.

As we reached our summit I stood, wide eyed and smiling like a school child with a bag of sweets. Rows of nesting birds sat, protecting their eggs or young, watching our movement carefully, the sea breeze rose up the slope from the Atlantic Ocean cooling our brows and providing welcome rest bite from the sun.

Our first sight of a Masked Booby on her nest.

When all members of the party had arrived the business of data recording began. New nests were tagged and recorded, previously tagged birds were recorded and the presence of eggs or chicks noted. Dividing into roles Bev found herself recording data, and myself tagging new nests. 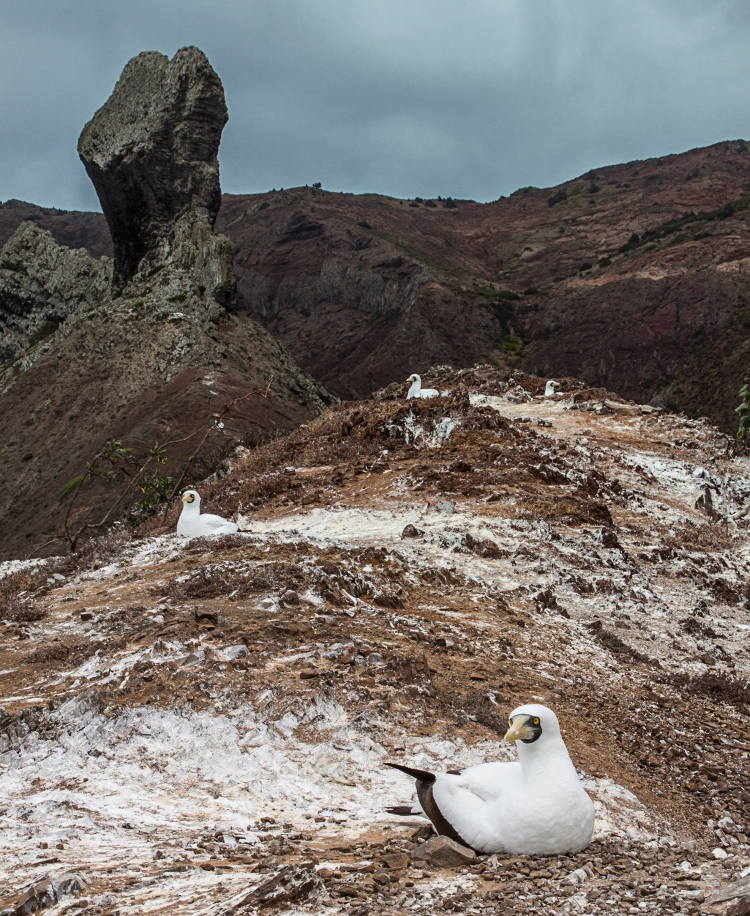 Annalea and Graham of course set to the job of catching new birds, measuring morphometric data and applying tags to their legs. Itching to have a go, I was elated when, after some half hour or so Annalea asked if we wanted to have a go at holding the birds. Bev went first (I’ll leave you to decide if I was a gentleman or a wimp!) and once the bird was secured by Graham, Bev nervously manoeuvred herself to take hold of the bird. Body and wings held under one arm, with the head and more importantly the six inch, serrated blades of the dagger like bill held firmly, but gently away from the hands of Annalea taking the measurements. Once all the data is recorded, the less than straight forward task of releasing the bird, ensuring they and you remain safe takes place. Point the bill away, release the wings first and a split second later the bill, and be sure the bird has room to spread its wings without damaging them. 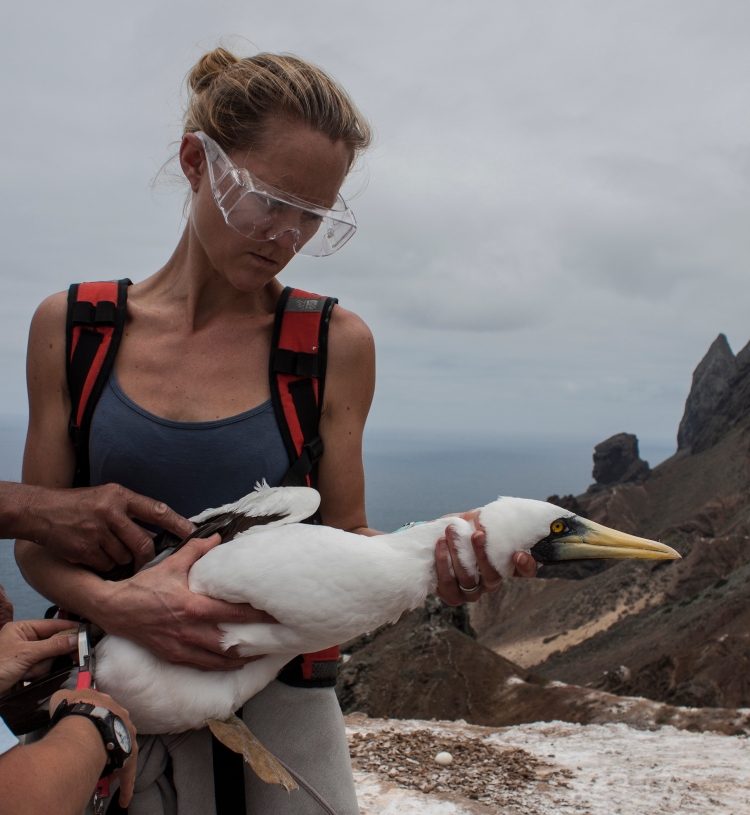 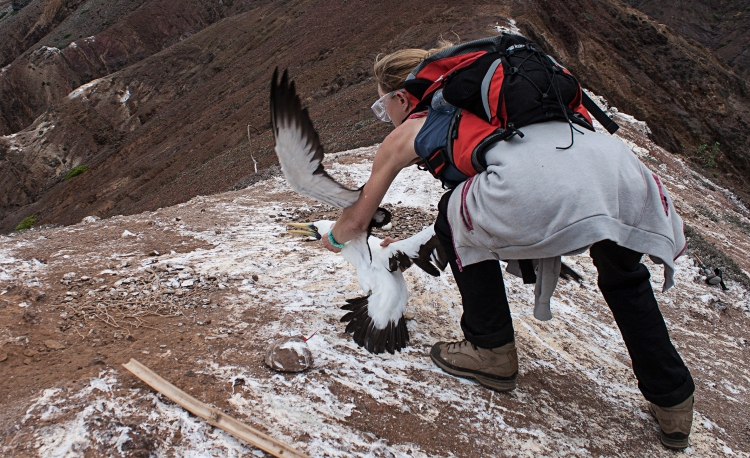 The moment of release.

Soon after it was my turn, and I was asked if I wanted to catch the juvenile bird ahead of me. Slowly I moved round and gently and carefully lowered the net atop of the Booby. Once secured, I was able to handle the youngster, allow the measurements to be taken and a ring to be applied before releasing safely back to his nest. The placid nature of this young bird led me into a false sense of security and my next attempt was less straight forward. An adult bird being larger, stronger and more determined as it protected the eggs in his nest. I could feel my heart racing a little as the beak stabbed at the net, and then at me as I edged closer to try and gain a good hold and free him from the confines of the twisted mesh. Once in my grasp he continued to wriggle and squirm in an attempt to turn his sharp beak on me. Thankfully neither I nor the bird came to any harm and I released him promptly, leaving him to take off and ruffle his feathers. 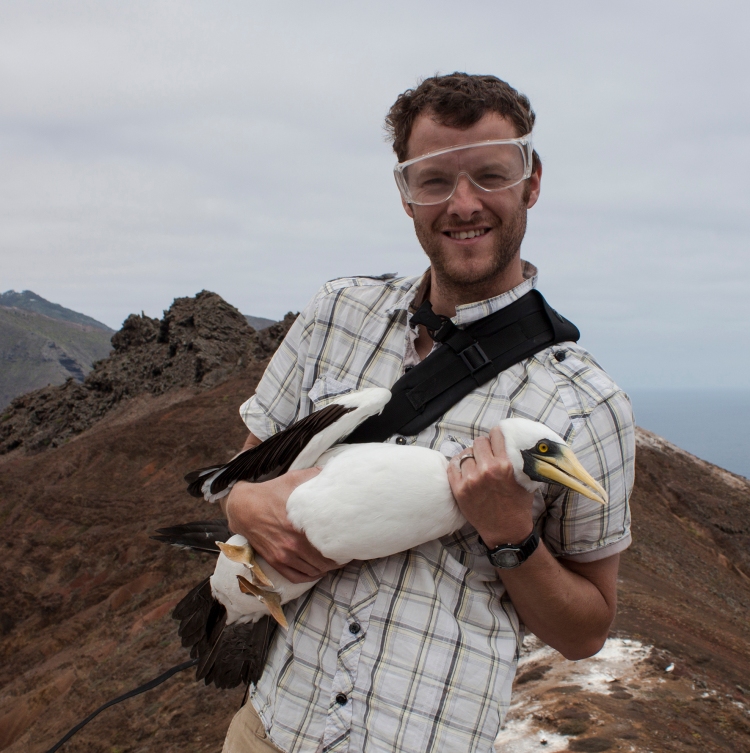 Me, holding a booby!

After two hours of shear enjoyment sadly Bev and I had to depart, subjecting our friend to Oliver and Charlie for seven hours we considered to be quite enough. Leaving the professionals to it they thanked us as we departed and headed back down a new scree slope and onto the Gates of Chaos.

There was of course no need to thank us, as I remarked, “thank you, it has been an absolute privilege.”

An apparently unusual sight to see both parents at the nest. 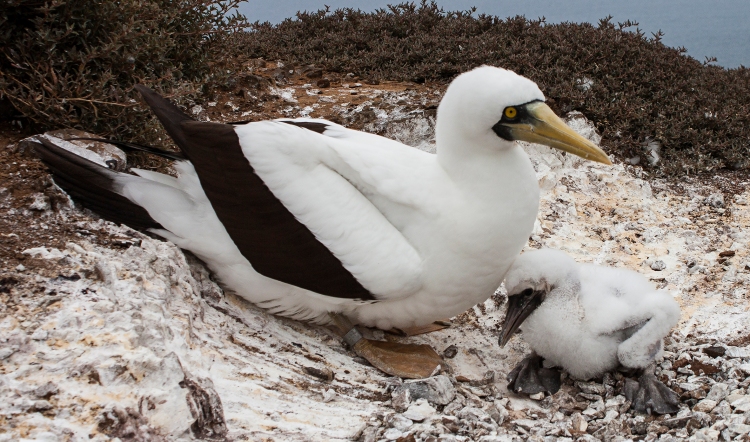 They fly so fast, capturing one in flight was difficult. I think a dedicated trip may be needed at some point.

Join 2,736 other followers
Follow Two Years in the Atlantic. on WordPress.com