Well, my intention of being up at 6am to see St Helena as a dot on the horizon did, rather predictably, fall by the way side. So, crawling out of bed at 7.30am, we made our way to the deck and there she was. The Island, the focus of our attention for the last 5 months, the vision in our heads for what feels like a life time St Helana. What a wonderful exciting moment, shared with others emerging on deck to see their new home for the first time, whispers and murmurings of emotions giving way to a tide of noise and chatter as eventually all 125 passengers appear on deck wide eyed.

St Helena as approached from the South. Our first view of the Island

I peered at this rock emerging from the sea, imagining myself in the opening scenes of King Kong. As we approached the barren  rocky cliffs, the Islands  secret lush interior is revealed only by the sight of a loan tree sat on the Island’s highest point, Diana’s Peak (823m). Two things struck me; mostly, I thought that this is a small island, a very small island, a spec in an endless ocean. My mind turned to the pioneering explorers, the Christopher Columbus’s of this World, the excitement and sheer overwhelming joy that must have greeted those brave men who crossed Oceans with no maps, in the hope of forging brave new worlds.  St Helena, although a British Territory for hundreds of years, was discovered in 1502 by Portuguese navigator João da Nova, on his voyage home from India and what must he of felt when, like me, he first saw the looming sea cliffs ahead of him?

The second thing that struck both Bev and I was its apparent lack of any recognisable inhabitants. Approaching the South side of the Island a huge wall of rock and sheers cliffs is all that can be seen, this imposing structure changes and becomes more welcoming as we move East round the island, the barren rock face gives way to welcoming peaks and troughs with lush green valleys and dry peaks. Eventually the ship approaches the North of the Island, the capital Jamestown and the first clues of the Islands inhabitants and long history comes into view as we weigh anchor to disembark.

Moving round the Island from South to North

As we approach our anchor point the Capital, Jamestown and the suburb of Half Tree Hollow on the “flat” plateau come into view

From our steady anchor point the capital, Jamestown is clearly visible, a narrow town of colourful houses rising up following the line of a steep sided valley. We get our first glimpse of Half Tree Hollow, a residential suburb of Jamestown perched high on a plateau and our soon to be new home town. We can even see our new house from here and thoughts of evenings spent looking out across the setting sun over the Atlantic Ocean fill my head.

Sat up on the plateau is Half Tree Hollow, accessible by a steep cliff side road which traverses the right side of the volcanic valley of the capital Jamestown

Before we know it our time aboard the RMS is over, and we disembark onto a small shuttle boat which takes us to the Wharf. Waiting for a favourable wave to lift our boat high enough to step onto the dry land we have a nervous excitement and butterflies in our stomachs. A short shuttle bus journey to the customs post is filled with the chattering’s of expectant and nervous new Islanders. 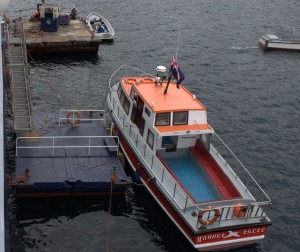 We left the RMS via this set of steps onto a shuttle boat.

After the necessaries through customs and immigration control we are greeted by Bev’s new boss and some work colleagues. On board the ship with us were the St Helena’s Commonwealth Games team, the returning heroes welcomed by a good crowd of local Saints and songs from pupils of the local primary schools. It was difficult not to feel as though somehow the cheers were for us, the Tyson’s, who have completed their epic journey and who’s new and fascinating life lies ahead of them.

Oliver is already off looking at the first of the Islands wildlife, aptly names Lightfoot crabs and Nimble Spray Crabs scuttling across the rocky breakwaters, with curious and beautiful Fairy Terns swooping by to investigate the Islands new residents.

After more form filling and waiting, we are taken to our hire car, a surprisingly normal Ford Focus, and followed the guide to our new home. This is the first of my island adventures, the incredible, steep road traversing across the shear face of Ladder Hill. Rising from sea level to around 400m along a narrow, winding road with cliffs to our right I am glad to be on the inside of the road. I learn very quickly that the Island is brutal on a car, but walking any distance is not an option. With a touch of Colin McRae, kicking up dust behind me we turn a sharp bend and Half Tree Hollow is laid out across the hill side ahead of us.

We had been told that the habitat and climate varies enormously across the Island, and that our home was on a dry arid plain, but nothing prepared me for the site that confronted us. Like a scene strait out of a Texan Western, our small home was surrounded by Cacti on all sides. We climbed a steep, dry, dusty track that leads to our home and as I look back down the hill I find myself dumbstruck at the most incredible view, looking out across the Ocean. Somehow, the endless blue we have seen all too well for 6 days has not lost any of its ability to impact the senses.

Can this be true, that we are here; that this surreal dream is a reality; that I and my family now live, on an Island, six miles wide and ten long. 1200miles from Africa, 1800miles from South America in the middle of the Atlantic Ocean; that we live, on the Island of Saint Helena.

5 thoughts on “The Tysons Arrive”