So last weekend we took our second trip out to look for the, as yet elusive, Humpback Whales and Dolphins.  Our morning would be spent on a new vessel to the Island, the Enchanted Isle. Still barring the web address from its previous life, she was 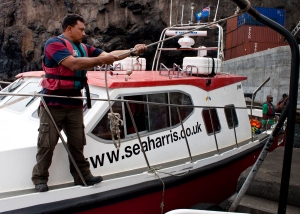 fresh from duties as a tour boat taking sightseers to the Islands of St Kilda in Scotland. Built in 2005, this 42ft vessel has a degree of comfort and style for the 12 passengers and, like the passengers on board, she has taken an epic journey from the UK, ultimately arriving on the Island aboard the decks of the RMS St Helena.

After struggling with life jackets and some scenes reminiscent of Mario Ballotelli’s now infamous attempt to don his training vest, we waiting for  the right wave to push the boat towards the wharf and stepped across the gap holding tightly to the swinging ropes. 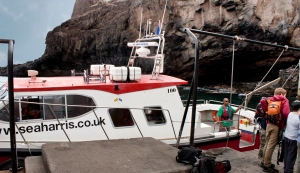 Just out of shot is a large group of people all trying to figure out how to put a life jacket on!

Our excitement at the trip had been tempered somewhat by the previously disappointing and ultimately fruitless outing. None the less, being on the Sea in any capacity is always enchanting for me and being the first passengers on board St Helena’s latest addition to the flotilla gave an added sense of privilege.

Ten minutes or so into our trip the Enchanted Isle made a sudden and quick turn, the more experienced passengers realising that the skipper, Johnny, must of spotted something in the distance. Sure enough we soon started to spot small, black fins breaking the water some 500 meters away. First one, then two, then around ten Bottlenose Dolphins were breaking the waves. One, more curious than the others, came within a few feet of our starboard side before diving below the boat not to be seen again.

A Bottlenose dolphin who broke the surface just yards from us.

As quickly as they appeared all was quiet again and we continued our journey along the Northern coast line. With an exclamation of excitement our first Humpback whale mother and calf were soon spotted. Engine slowed to a dead calm so as not to spook, them we watched the giant family surfacing and blowing jets high into the air before promptly diving below leaving us fantastic views of a 5m tail disappearing back into the blue. One could argue, given the limited view of the whale, a mere ice berg of tail and hump with the majority of the animal remaining hidden below the waves that the experience does not justify the hype. This is most definitely not the case, there is something undeniably wonderful and enchanting about the privileged view of this enormous tail slipping silently into the waves. Despite their size these animals are not commonly seen and an indescribable sense of awe is shared amongst the onlookers on the Enchanted Isle.

The magnificent site of a Humpback Whale disappearing back into the ocean.

These magnificent animals spend the Northern Hemisphere’s Summer months around St Helena in calm tropical waters to give birth to their young. These behemoths of the animal world, growing up to 16m and 30 tonnes, will fast in the nutrient poor waters of the tropics for several months, allowing time for the calves to suckle and grow fast on mother milk containing 40% fat. In St Helena they remain in the calm Leeward waters for several months from July to October, although solitary adults can be seen from June to December. Growing quickly, the calves soon become strong enough to complete an epic journey North of some several thousand miles to feeding grounds in more productive temperate seas.

Knowing they can dive for up to 35 minutes, and travel some distance in that time, we move on, soon spotting a pod of resident pan tropical dolphins. Sadly they kept their distance and our views of them were not spectacular. Further down the shore our second mother and calf came into view, this time stopping around for a little longer and seemingly hanging motionless for a time, before once again disappearing into the blue with a splash of a gigantic tail.

Before putting on the burners we were instructed that it would not be safe to remain at the bow of the boat where the best observations were to be had and the party moved back to the rear. It soon became apparent why, this boat can shift up to 26knots (around 30mph) and we soon found ourselves holding on to the rails, with wind and spray in our hair. John, a fellow passenger on board the RMS and new Maths teacher to the Island, nearly took a tumble into the sea such was the acceleration of the boat. John has become a good friend on the Island, moving here on his own and with a sense of adventure he has travelled extensively, but nowhere it seems quite like St Helena. He has quickly involved himself in the numerous sporting opportunities on the island, from Cricket to football, badminton to golf you will find John taking part, and claiming to be “not great at it” whilst more than holding his own at most things he turns his hand to.

Sharing our journey with us is the effervescent Christine. Having now caught up with my blog, she rightly feels that I should hand to her a greater role and position within our story. With that in mind I shall now refer to our eminent scouser as Her Lady Christine, and her Ladyship looked every bit the dignitary as she held on for dear life, wind blowing her hair like a scene from a budget production of Titanic.

Looking every bit the Lady of the Island Christine hangs on for dear life!

Like an action shot from some 1970’s cop drama. The awesome Andy Day (left) and his son Toby (right) and John (centre) 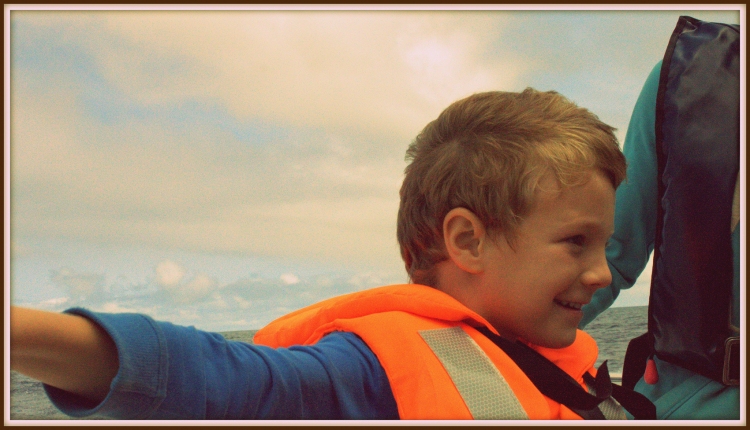 My eldest Oliver enjoying his cruise

Oliver enjoys the speed and waves. 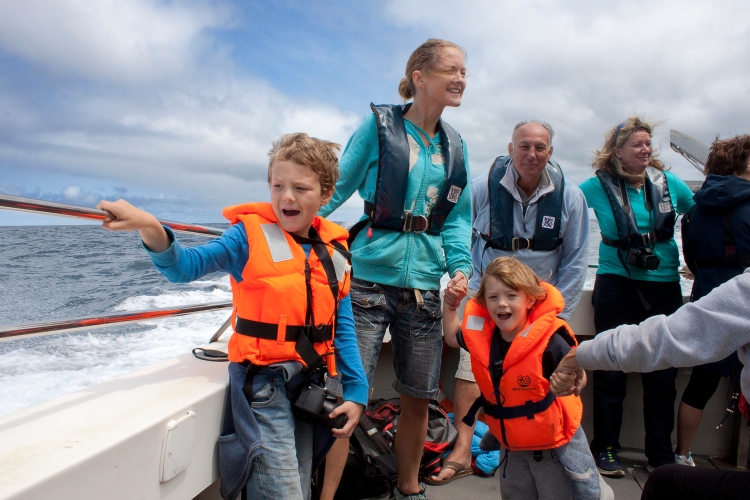 We sped onwards to Speery Island, a colossal, jagged rock looming out of the sea and used by nesting sea birds and human fisherman alike. Here we turned back  and took a slow canter back East, passing close to several rocky islands including Egg Island, stained white with successive layers of guano. Here we watched as Black Noddies and the beautiful, pure white Fairy Turns swooped and chattered around us. 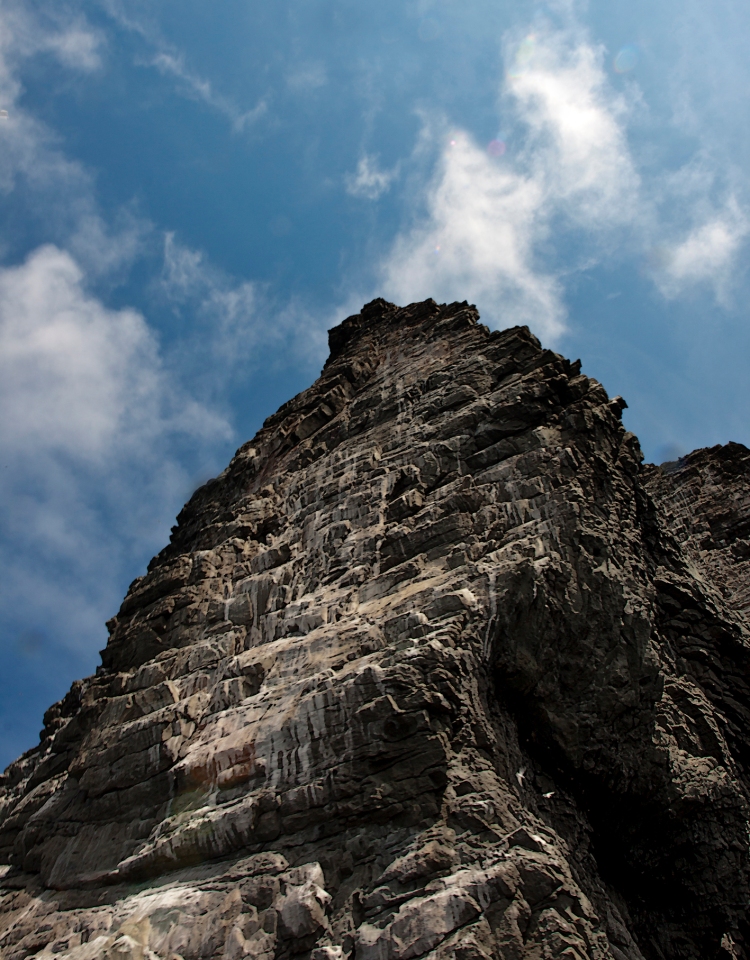 Our slow cruise back to Jamestown was interrupted by a third sighting of mother and calf, this time further in the distance, but no less wonderful to see. Three mother and calf pairs on a single trip is apparently an uncommon occurrence.

Slowing down along the coast also permitted the opportunity to speak with Johnny, the Ship’s captain. A knowledgeable and affable Saint, happy to tell tales of history and geology of the rocky formations we viewed as we passed by. In typical style, Bev meanwhile had found herself befriending the crew, and before long was taking hold of the ships wheel. Luckily for Bev the pilot had not experienced her driving on the Island, and luckily for the passengers her piloting of the boat remained secret until she emerged back on deck!

With a final turn of speed we headed back to Jamestown. Our second journey out to look for Whales had been a success, and, with only a few weeks left before these giants leave for another year, our third trip is already booked.

After lunch that day we returned to the shore for a brief swim and snorkel in James Bay. Our first venture into the water was guided by Andy Day and his eldest son Toby, whom continue to help us, guide us and who’s company becomes all the more enjoyable as time passes. A twenty minute swim in the crystal clear water resulted in the sightings of six endemic species of fish, along with numerous starfish and giant conch shells. Oliver did not quite find the nerve to jump into the choppy waters, but our youngest Charlie, ably assisted by Andy, did take the plunge.  His first five minutes in the Atlantic Ocean was met with a combination of fear and hysterical laughter but I think a small wet suit, snorkel and mask of his own will be on the wish list following this adventure.

Black Noddies atop of years of Guano accumulation!

Our day was rounded off with home baked bread made by Bevs own hands, which I enthusiastically used to mop up gravy following our satisfying Roast Beef dinner. 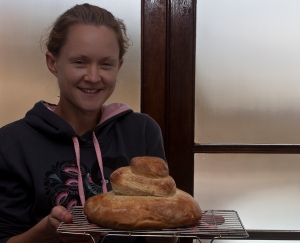 For a first ever attempt at home baked bread this was phenomenal, proving there is no end to my wife’s talents. Fresh out of the oven it was delicious!

Days like today are the reason we took this move, they are to be cherished and not taken for granted. Good for the body and soul we wait anxiously to see what next weekend will bring us, if it comes close to the incredible day we have just had, we will be doing very well indeed.