April was just another month on St Helena, but what a month it was. Had I not been here for 20 months I would be a little blown away by it, but nothing surprises me any more on St Helena.

So April saw the first ever jet plane land on St Helena, then, the landing of a Boeing 737, and now, towards the end of the month, it was the Inauguration of the 68th, and first woman, Governor of St Helena. Lisa Phillips’s arrival has been much anticipated by most of the Island, the fact that it is our first woman Governor alone is news itself, but it is also the first governor of recent times that has worked her way up through the ranks of DFiD (Department for International Development) rather than the Foreign Commonwealth Office. This brings with it an expectation of a different approach, outlook and attitude, the hope of a new way of doing things here on St Helena.

I have to say my first impressions are very good indeed. In stark contrast to the previous Governor, when arriving on the RMS on the 25th April, Miss Phillips insisted on disembarking and arriving on the Island with the other passengers, not in a private vessel, she walked up the wharf rather than being driven, meeting and chatting with people on route, she clearly wanted to be seen as approachable and down to earth.

Her inauguration ceremony took place in front of the castle to a large crowd. Preceded by a parade of various departments and societies including the Beavers which Oliver was a part of. He marched well, even if he was a little bemused by the whole thing. The Governors speech was superb, hitting all the right notes and mentioning all the right things, and priorities, as well as reaffirming her open and approachable nature and her hopes of being a Governor that is part of the community and not just the face of Plantation House. After the ceremony she took a great deal of time to move round the various groups, societies and in particular school children and public to say hello and give a warm smile to expectant faces, a nice touch given that she had just stepped off the ship following a ten day journey at sea and must have been exhausted! All in all a great start, we now wait to see what her tenure will bring.

Good friend Paul Brough waiting to play in the band 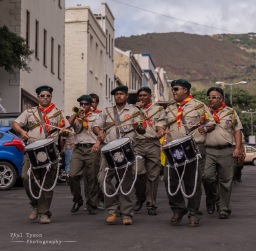 Oliver dressed smart for his parade. He looks as awkward as his dad when you put him in a shirt! 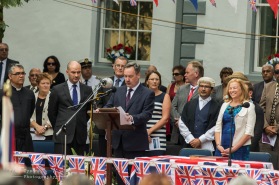 On a personal note April was packed with stuff, our social life has been relentless, barbecues, parties, days out, diving, snorkelling, swimming walking, all a bit non-stop. 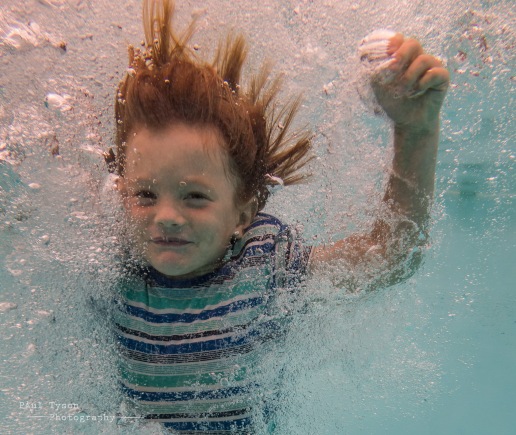 Fun with my new camera.

Two things featured heavily in my life in April, my underwater camera, and the second

Bridgewater family who arrived in March. A dinner, barbecue party, and two boat trips have been the highlights, the latter allowing me to combine great company, with some excellent fishing, my first experience of spear fishing, and, of course my new camera. Travelling with Johnny Hearne on the Enchanted Isle is always a pleasure. A touring boat capable of high speed that was once a US Coastguard vessel, and latterly a tour boat operating off the Shetlands Isles’ in the UK, this wonderful boat finds herself operating tours, whale shark trips, bird watching cruises, sight-seeing, stargazing and booze cruises around St Helena. A particular highlight of this trip was the pod of 300 or more Pan Tropical Dolphins that joined us for a time. Dolphins of course are a regular sight on our boat trips but it has been a long time since we have seen this many, jumping spinning and displaying all around us. Everywhere you turned a dolphin was in view and the pod, including hundreds of young calves, was performing admirably for its enthralled audience. 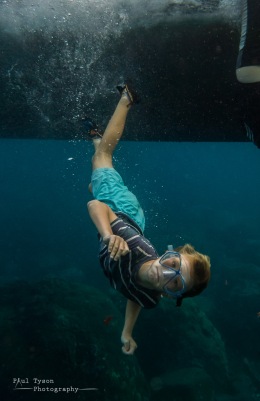 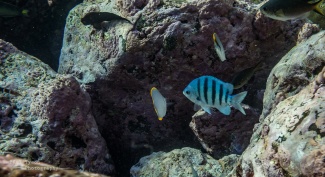 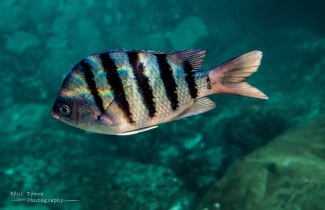 After a magical ten minutes, the show suddenly reached it finale as all at once hundreds of dolphins broke the water surface at once and spread out in a huge circle around us, I’ve never seen a sight quite like it as dolphins jumped in unison, and in huge numbers all around us before disappearing. Our knowledgeable host Johnny explained that there was probably a large predator in the water and this circle of spreading dolphins was a defensive tactic to confuse the predator and prevent it from pin pointing a target prey animal. It was amazing to watch and my only regret was not having my pro camera and telephoto lens with me.

The undoubted highlight for me this month, and if I’m honest, many months was the New Horizons concert. Last year you may recall I was asked to photograph this annual show which raises money for New Horizons, a local sports and leisure youth group. Whilst watching last year I knew that if I were able then I had to take part and this year was my chance.

I’ve always enjoyed singing, and love a bit of karaoke as my friends will testify, but I haven’t been on stage since 6th Form. Several weeks have been spent rehearsing with a local band. This in itself has been a great experience singing with a live band and such incredibly talented musicians has been a whole new thing for me and I loved every second of it. And so, on Saturday we came to the day of the performance, and from about midday the butterflies started to grow and I spent most of the afternoon pacing up and down itching to get going. I went along to help put the finishing touches to the stage and my nerves were not helped by the sight of people queuing at ten to five, a full two and a half hours before the performance.

Community shows and events like this all always well supported and well attended, the lack of cinema, theatre and other evening entertainment enhancing the expectation and desire for these local events. By the time Bev and the boys arrived 450 people packed out the hall at Prince Andrew School as over 10% of the Islands population turned up. After a less than convincing rehearsal two nights before, and a significant part in the finale song which I had never heard before I was, needless to say, extremely nervous.

The show was briefly interrupted by the late arrival of our new Governor, late only because she had been taking part in a walk for cancer awareness before rushing over to support New Horizons. Her arrival caused something of a stir so compare Ben Hathway thought best to introduce her formally to the crowd. Asking how she should be introduced, “right honourable”, “ladyship” or something else Lisa Phillips replied with, you should introduce me as Lisa, Lisa Phillips is fine, almost bemused at the suggestion there should be any great fuss made at all.  Word also has it that after the show she was seen dancing at Donny’s  bar, she continues to impress me.

Back to the show I stood in the wings watching the other performers nail it and up their game for the live show I worried that I was just get it all hopelessly wrong. But I needn’t of worried, excusing a couple of minor tonal errors my rendition of Elton Johns “I guess that’s why they call it the blues” went off without a hitch, and Walk the Moons – “Shut Up and Dance” has been described as the shock performance of the night (in a good way) on local radio, and as many peoples favourite song of the night, I was even mentioned in a tweet by our Governor Lisa Phillips no less. I came off the stage absolutely buzzing, what a thrill as my children told me they thought I was brilliant. 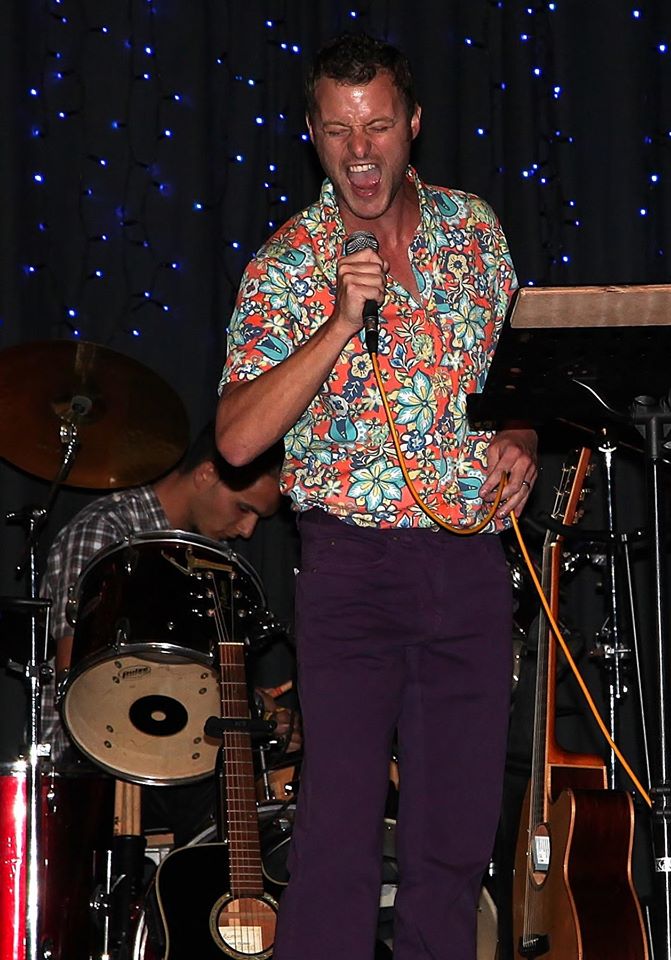 April has been a bloody brilliant month, I cant wait for next years concert and to see what May 2016 now has in store for us. It is only two months until we return to the UK for our second break to see friends and family. If Bev had not been granted an extension then our journey would be perilously close to the end, thank fully I know I have at least one more concert in me, and a few more dolphins to watch yet.

Finally, what do you do on St Helena when your car is in the garage and you need to pass the time, drink coffee, have a beer, read a book, or maybe just go and swim in clear blue waters with beautiful fish and a friendly Green Turtle. Not a bad way to pass the time! 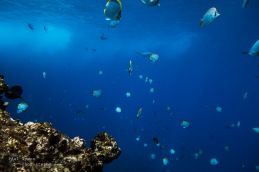 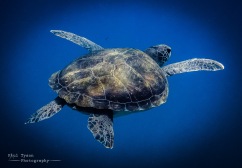 2 thoughts on “Just Another Month”