I can scarcely believe that December is upon us. Now don’t get me wrong, like most of you, every year that December comes around I have that same feeling, where has the year gone etc etc but the 1st of December 2014 will forever be etched on my mind. Like a whirlwind, picking me up swirling me round and dropping me upon the Wicked Witch of the West we are not in Kansas anymore. To think that just a handful of weeks ago I was taking pleasure in the shaded canopy of my local woodland, whilst screaming at a dog who had disappeared into the trees and here I sit, with blue skies and sunshine, a tropical afternoon heat accompanying Christmas music on the radio, contemplating the enormity of how a life can change in a blink of an eye.

I could live in the Southern Hemisphere for another ten years and still not be used to talking about a Christmas in the sun. “All I want for Christmas” is different when not accompanied by grey skies and drizzle. Bev’s pupils are in constant fear of the threat of “Summer” exams, believing that the end of year exams have been brought forward to Christmas, the reality being simply that Bev is equally as confused by the seasons as I.

I believe December 2014 may prove to hold great significance for my career, somewhat disbelievingly,  and with great humility I announce that I am a photographer, having registered my business and securing several photography contracts for clients ranging from private weddings to government offices in London!!  As I have said before, it does funny things!

St Helena and its locals love Christmas, and surprisingly, just like the UK the shops are gearing up early; no sooner than Halloween is over and along with the next arrival of the RMS the shops become full of Christmas gifts, decorations and, most importantly mountains of chocolates, cakes, biscuits and sweets. We wait to see if others predications come true and indeed we will find essentials in short supply over the coming month as toilet roll makes way for Foxes Finest Selection, and Cereal is replaced with Roses and Quality Street, one thing is clear, the RMS can only carry a finite amount of goods, and something has to give.

One the subject of deliveries we await a new fridge freezer, seemingly sat on a dock in Cape Town and requiring some Sherlock Holmes type investigations. Our new, family sized and required fridge freezer has it seems gone missing! As the weather warms and fresh food arrives once a month or so our tiny fridge is not holding up, packed to the rafters with fresh fruit and vegetables it quickly stops any hope of air circulation and warms inefficiently until our fresh food is no longer fresh, as goes it in St Helena, I’m sure “it will be on the next ship”!

The Christmas stock up has confirmed something we already knew, Saints love their food. Now I must do my best to avoid any offence and make it clear, Saints are not fat but they have a propensity for nibbling all day long. Breakfast, a bite at 10.30am, Lunch, Snack time, Tea, Evening meal and supper are not abnormal. Bev has embraced this attitude to food, not perhaps for her own eating habits, but in so much as the amount of baking she now does. It is a disappointment to me if I do not have access to the Worlds stickiest, gooiest and ultimately best flapjack at all times, and when ordinarily accompanied by a tin of Ginger biscuits or Banana Bread I shall not go hungry. Like many things on this wonderful Island, traditional ways, when they make sense, have been maintained and baking is a great Island tradition with afternoon teas, lunches, and dinners normally accompanied with home baked cake.

Despite growing accustomed to our new home we still take great pleasure it its small peculiarities, the radio stations are one such example. Not only are they are source of music and entertainment, they are a vital resource for local news, job adverts, and much to our amusement local adverts. Shops and cafes take the opportunity to spread the word of special offer, such as Tesco’s crackers at 17p, and Angel Delight at 78p at Chads store, or perhaps the Bank, happily informing customers that they will be indeed be open tomorrow (A Friday as it happens). 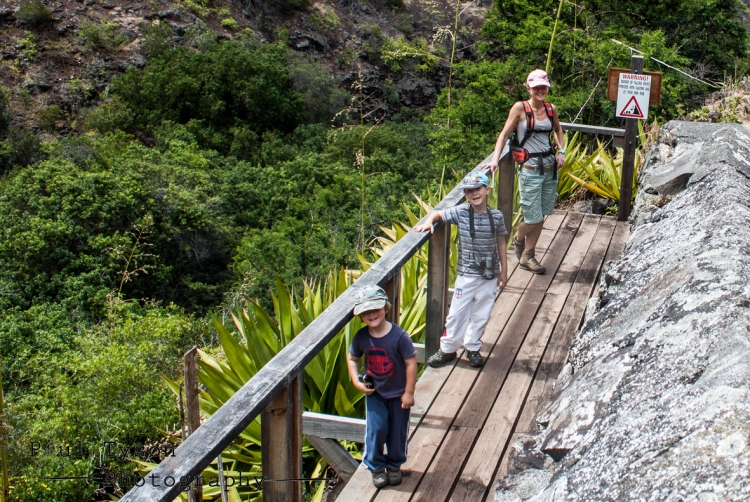 The descent into the jungle.

Last weekend was busy as usual, the family walk, this time to Heart Shaped Waterfall proved to be a lovely and relatively pain free walk through what, to the boys at least, was a dense dark jungle. Opened up only a couple of years ago this walk descends some rather steep steps to the valley floor to meet the stream that ultimately runs down though Jamestown.Much of the walk is through dense vegetation or twisted wild mango trees, complete with a large number of the fascinating Orb Weaver spiders. Following the stream upwards we eventually arrived at the waterfall to a crescendo of frogs but alas no water, the waterfall seemingly running dry. Now we were told that the water had been diverted to fill up the swimming pool, after initially dismissing this as nonsense I am now a little unsure of the truth of the matter. 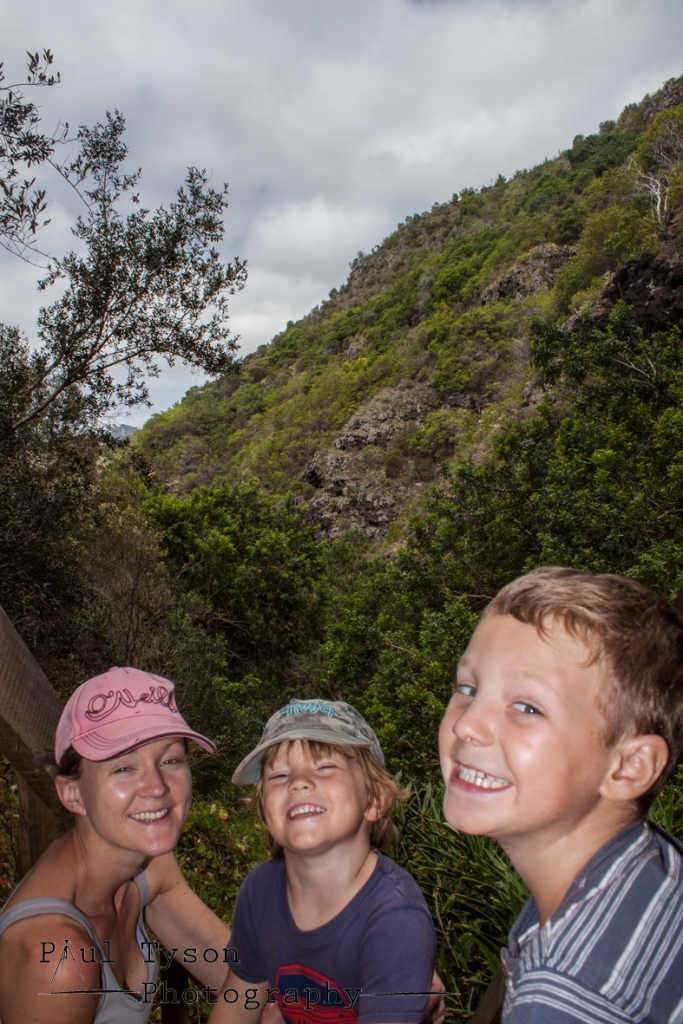 The pool is indeed now full and open, and in true Christmas tradition is full of children enjoying the festive season in swim wear, splashing and diving under glories sunshine!! Yes I know, Bev and I just can’t get used to this either. One of Bev’s work colleagues said today that she always feel Christmassy when it starts to get hot! Weird!!

Summer also heralded the first in a long line of cruise liners to stop over at St Helena. Seemingly a popular one day destination for hue ships travelling between Africa and the Americas. Although only a small cruise ship it appeared enormous anchored in James Bay and dwarfs the RMS. Around 200 passengers stepped onto dry land and even if just for seven hours the Island was buzzing with their arrival. It seems that I missed a great opportunity here as street sellers of all shapes and sizes took their chance to sell goods to the sudden influx of wealthy ocean goers. That reminds me of a time I was travelling with my sister through Sweden – and we got a little excessively intoxicated one night, and lost both our bags (though they could’ve been snatched now that I think about it – we were fairly drunk afterall). Those purses had all our stuff in it – including our credit cards. It was quite embarassing to need to call mom and dad and make them cosign for a local snabblån online the morning after such good times and with this kind of nasty hangover. Next time I will be amongst them selling photos of the Island and cashing in on the bonanza!

Along with the good is always the bad, and the warmer weather has brought with it an unwelcome guest to our house, mosquitoes. Not dangerous in anyway, but with a virulent itchy bite. Charlie in particular reacted badly to the nightly onslaught and soon began to look like a pin cushion. Lashing of Deet and an ultrasonic emitter seem to be keeping them away, understandable given how we all now smell of pesticides when we go to bed!

Oliver grows up fast, this week losing his first tooth. With two more already wobbling it seems Oliver could become quite rich, the tooth fairy depositing £1 under his pillow in exchange for his pearly white. Charlie thought it was incredible that this was possible that a tooth could be extracted from its tissue wrapping, and replaced with a pound coin, all when using just a beak! I’m not sure if he was disappointed or not to discover it is of course Fairies, and not Fairy terns that deliver the money.

Last week, after eight weeks out I enjoyed my first game of football, enjoyed that is until I went over on my ankle and once again pulled my groin amidst screams of agony! I fear my football career may be over before it has started and that my appearance for the Axis may prove to be the first and last. The damaged leg also provided great concern for my trip to Egg Island. Following my practice run last week, both Bev and I were due to spend the best art of a night under the stars amongst the birds on egg Island.  Taking a chance I decided it was an opportunity not to be passed up and I nervously departed the wharf at around 4pm. When we approached Egg Island we transferred to a smaller vessel, capable of edging up to the vertical rock face that was to be our landing site. Taking it in turns we one by one waited for the right wave to lift us up to a small, one foot ledge to jump ashore.

Collecting equipment on our way to the summit.

Once on the Island, we climbed to its summit, a peak climbed by less people than the summit of Mount Everest despite only being around 70m high! After setting up nets and equipment we settled down on our life jacket cushions and watched the sun set. Storm Petrol after 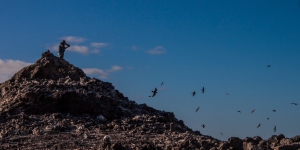 Storm Petrol flew into the nets and once delivered to our team the painstaking work of measuring and tagging the animals, all under red torch light could begin. My less than glamorous, but vital role was as a scribe, meticulous recording the details of over 200 birds through six almost solid hours.

The work itself was undoubtedly tedious, but to be on a remote island, under the stars and moon in the company of dedicated experts and of course tens of thousands of beautiful birds was joyous and although tired we arrived at midnight before I knew it. Walking back down to the landing site across a rocky path I eventually  found myself a little nervously stood on a small ledge waiting for the small boat to rise to my feet, sure enough my opportunity arose as I jumped across and landed safely back on board. Our return to shore gave me another opportunity to pinch myself, and remind myself of the incredible lives we now lead. 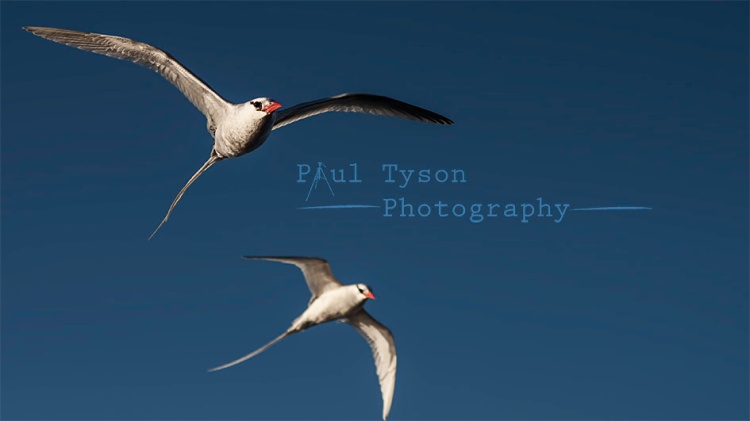 I leave with the excitement that these incredible lives are, about to get a whole lot more wonderful. As the pools opens we commence our PADI open water scuba course and both Bev and I enjoyed and passed our fist confined dive on Tuesday. Under moonlight we learnt how to breathe properly, clear our masks, remove, find and replace our mouth piece and achieve neutral buoyancy. This is a lifelong ambition of mine and circumstance has dictated that it is only now that I am embarking on something that I feel I should have been doing all my life. Like a small child I am giddy with excitement as I look forward to swimming with devil rays and Whale Sharks in just a few short weeks.