Having lived on this incredible Island for a full three weeks  and  feeling as though I have been a resident for an age, I am now,  of course, an authority on the Island and its people!  With this in mind I thought it appropriate to dispel some myths, or at least misrepresentations, that I encountered before we travelled from the UK.

The Island is, without question dependant on financial grant in aid from the UK government, from UK tax payers. This is often portrayed as though the local Saints are reliant on hand-outs, in the same way that many people back home are reliant on our welfare system. You will read that the Island has no natural resources to speak of, no agriculture or productivity and that it is dependent on the UK taxpayer to “keep” people on the Island. I have even encountered comments to the effect that people should not be permitted to live here if they cant “fend for themselves” and should be deported from the Island. The extreme end of these views angered me in their narrow mindedness before I left the UK, and now leave me bewildered by the inaccuracy of portrayal and authority in which they are given with little or no regard to actual research of the truth. 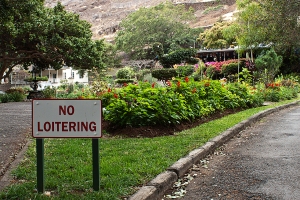 Upon our arrival in Jamestown we came across this sign in the local gardens. Feeling perplexed as to why exactly one could not sit, or wander and generally linger doing nothing, in what seems like an obvious place for such behaviour. As it happens the locals agreed entirely and after a series of complaints this inexplicable sign has been removed!

Saint Helena is a UK Dependant Territory, arguments can be made as to what this means but essentially, it is, and has for most of its long history been part of the United Kingdom. The East India Trading company and later the UK government directly, stationed people on the Island. They brought African slaves, Chinese labours and other ethnic peoples from their homes and forced them to this isolated outpost of the empire. After generations on Saint Helena the people here are proud to be part of that United Kingdom (poignant given the pending referendum across the Scottish border), and yet in 2014 we should then abandon the Island and absolve ourselves of responsibility because the Island costs us money. Should we equally absolve ourselves of the burden of the unemployed, disabled, or infirm!

The people of the Island do not rely on hand-outs, they work, and dammed hard. Most Islanders have at least two jobs, unemployment is very low on St Helena but so are wages. Unfortunately though there is little export and much to import, therefore UK government grant in aid is provided to maintain government services, education, welfare etc. In order to generate capital, an Island, community or country must have something that others wish to buy and simultaneously must reduce its need to purchase goods from elsewhere, hence bringing money into the economy in greater quantities than it leaves.

The two exports remain tourism and fisheries, both of which are historically very small in scale. Recently, huge efforts are being put into expanding both of these commercial areas as well as developing  in new areas such as extremely successful enterprises in coffee production and products from the Islands unique distillery.  Agriculture is also being advanced and has increased by 355% since 2010/11, reducing the need to import foodstuffs from abroad. The private sector economy as a whole is on the rise, and, combined with localised food production helps to recycle capital brought to the island and reduces the leakage of wealth back to the UK or South Africa. Many of the Islanders have great entrepreneurial spirit and St Helena certainly provides opportunities a plenty for those prepared to invest time and money to fill the numerous niches that are available.

The Island suffers from lack of a competition in its service sector, only one supplier of water and electricity exists, ditto for communications and media. Whilst providing an excellent service, the result is artificially high prices, but attracting a competitor to supply, for example, electricity, to a customer base of little over four thousand people (approx 2000 homes) is neigh on impossible, and would in all likelihood require a foreign Service provider and hence increase money leakage to overseas shores.

Low wages, coupled with a lack of corporate or council tax largely due (as far as I can tell), to a historical lack of central service provision, results in very low income generation for local government. A cash economy exacerbates the problem with hidden or absent paper trails for those earning more than the tax threshold. Change is required with increased rates and new taxation required, but vicissitude of this kind is always painful and is sure to be met with resistance if indeed it is proposed. 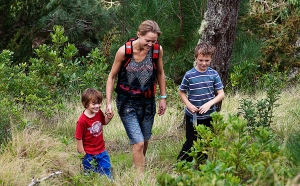 Our weekend walks continue. This time to the beginning of the ridge of Mount Eternity although sense prevailed and we did not attempt it with a three year old in tow!

I continue my slide toward domestication, today getting excited at finding a hessian shopping bag, and even venturing to a friend’s house for tea and “a chat” this week. Those of you who know me well will appreciate the only time I arrive for a chat is if it is preceded by a pint or two. Caroline, my host for the morning, is an adopted Scottish woman, who left her home in California twenty years ago to start a new life in Scotland. In her own words Scotland has only just caught up to where California was twenty years ago, and now she and her lovely family have stepped back in time a further twenty years to start a new life on St Helena.

My life on the Island has settled to a routine of taxiing, shopping, coffee, household chores and an undue amount of plumbing thanks to the requirements of a new dishwasher and the accident prone feet of my youngest.

It seems my awkward demands of one and a half sugars in my coffee, have led to a quick transition from new comer to regular, at the St Helena coffee shop, where one of  the world’s most expensive coffees, (excluding those defecated from various animals) is prepared for me before my arrival at the counter. 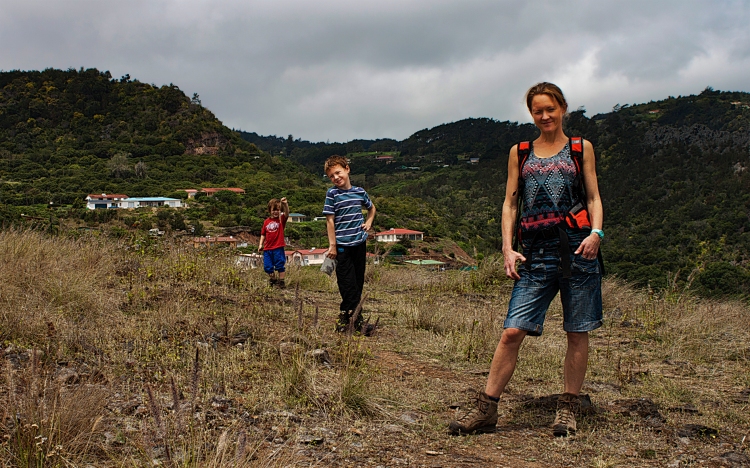 For the first time in my life I have a pocket notebook, necessary for planning my foraging trips, recording names and numbers, and for penning memory jogging notes on subjects ranging from where to purchase sandals for Bev to Christmas presents for the boys. On Christmas I am gobsmacked to find myself thinking of the subject in early September, in stark contrast to my usual Christmas Eve panic. However with last postal orders to be made by mid-October, present procurement is something we must start to think about. Unlike us mere mortals Farther Christmas is not limited by the availability of the RMS! For any family reading this, my own Christmas list is short this year and consists simply of a Go Pro camera, or money for thereof.

The coffee house provides a regular spot to read the two local newspapers. On this small Island newspapers and the two local radio stations are vital sources of information for both saint and expat alike. And on the subject of radio I have become an avid follower of the BBC World Service, which I am certain places me on an equal echelon to those listeners of Radio Four! I shall be listening eagerly tomorrow as the results of the momentous vote in Scotland come in.

My polite waving reached a new peak this week when I found myself giving a casual, but friendly wave, to a cat!! This has made me reassess the sincerity of my automated hand twitching and I am beginning to discover that, although still very friendly and partial to a wave, it was myself as opposed to the locals who instigated said waving during each passing of a car, pedestrian or feline. Under the suspicion that some Islanders are perhaps a little fed up of the stupid British man who keeps waving at people they don’t know I have decided to hold fire in future until I see the first and instigating hints of movement from the hand of those passing by!

My wife continues to impress me, and I have become in 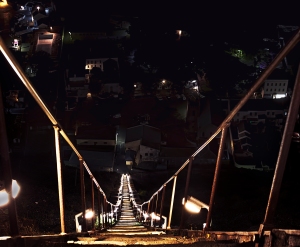 The Descent down my Nemeis Jacobs Ladder as seen at night. Bev shattered my time by a full two minutes and has left me questioning my manliness! I must beat her before we leave the Island!

awe of her ability to developed her professional aptitude, instigate positive change in her department, dedicate herself to the care of her pupils and yet still maintain her position as number one Mum, the apple of her children’s eyes and the glue that holds the household and family together. Bev is now being asked to help raise standards and implement change in the Science department, and she seems to be happy with the challenge of this role, although we are both mindful of her main objectives of introducing Marine Biology to the school curriculum and hope that the opportunity to do this is forthcoming in the new year. Add to the above the fact that my wife tackled Jacobs Ladder, not just beating my time but knocking a full 2 minutes off my attempt with an unbelievable time of eight minutes eight seconds and a picture of a pretty incredible woman who fills me with pride emerges.

Exploring the Island further continues to leave me fascinated and often without words to describe the stunning scenery, diversity of landscape, fauna and climate. A sense of history pervades every turn, road, building and view point. Whether it be centuries old canons from shipwrecks washed up upon the shoreline, my gruelling walk up Jacobs ladder, World War Two gun garrisons or the long succession  of historical statesmen  to of trodden the old wooden floors of the Consulate Hotel, this settlement in the South Atlantic has maintained its long and important links with the past. The sense of connection to the mariners and explorers, admirals and emperors, captains and scientific scholars of the past is a heady charm of this unique place. 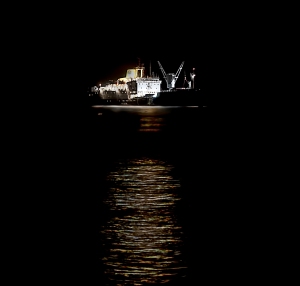 A stunning sight at night anchored in James Bay

Maintaining its own place in history is the RMS St Helena, arriving back in James Bay today following its latest trans-Atlantic journey to Cape Town. The Last Royal mail ship has a magical effect on the Island. A life line to the outside world it may be, but more importantly is the connections with virtually each and every person on the Island. Most of the people have travelled upon her and walked her decks. Many of us arrived on the Island aboard her and those who fall outside of those categories have seen friends, family and loved ones depart and alight on her. An unexplainable sense of completeness spans Jamestown when she is in port and I suspect I am not alone in feeling as though it is my ship back home when she anchors in James Bay.

7 thoughts on “A Saintly Life”